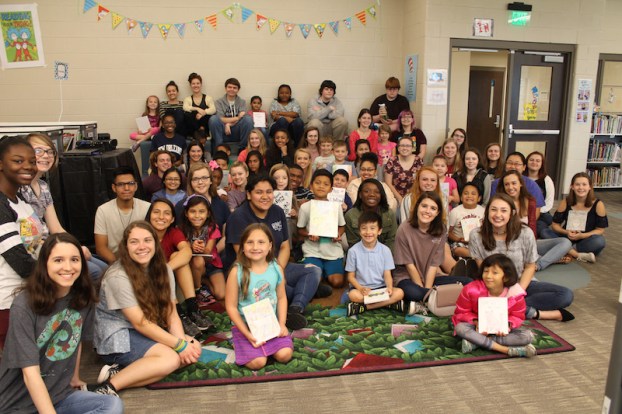 As spring ’17 rushed towards us, many new versions of old stories unfolded. Pelham High School writing students and artists continued our annual partnership with first-graders to experience the rush of creating children’s books and the academic lesson of writing for an audience.

For years, we partnered with Bonnie Haines’s class at Valley Elementary School. With the opening of our new elementary school and our second repurposed elementary school, the decision that drove where these high school writers would land rested solely on the willingness of a first-grade teacher.

Pelham Ridge first-grade teacher Leslie Nelson had insight into the project because both of her artistic children illustrated children’s books when they were at PHS. Graciously, she volunteered to allow her class to participate. Initially, first-graders and their parents are asked to respond to an informational letter detailing the project. The letter listed questions that would lead writers to audience understanding.

Nelson’s first-graders’ adventurous responses to the question, “If you could go anywhere in the world, where would you go?” offered far-reaching replies. These worldly 6- and 7-year-olds listed Australia, Alaska, Hawaii and Paris as their desired destinations.

More questions followed. “Does Ashton wear glasses all of the time or was he only wearing sunglasses because the class was on the playground in the photo we saw?”

Nelson shared that Ashton wore glasses that morphed to sunglasses on the playground. My students agreed that Ashton’s glasses were very cool.

As stories unfolded and characters took the lead, a cheetah police officer tamed a town, friends banded together to overcome bullying, clown fears were pushed aside and races were won. Ultimately, 19 children’s books were prepared for 19 children.

PHS writers were welcomed to Pelham Ridge Elementary School where they met their first-grade audience. As children paired up with their writing teams, elated smiles, laughter and delight filled the air. Mutual appreciation abounded.

“Writing these books was very demanding. I have one question,” I said gaining my students attention. “Was the hard work worth this response, this joy?”

“Yes!” was their boisterous reply.

By CONNIE NOLEN / Community Columnist “How do you do it?” Brian Crocker asked. “How do you invest so much... read more