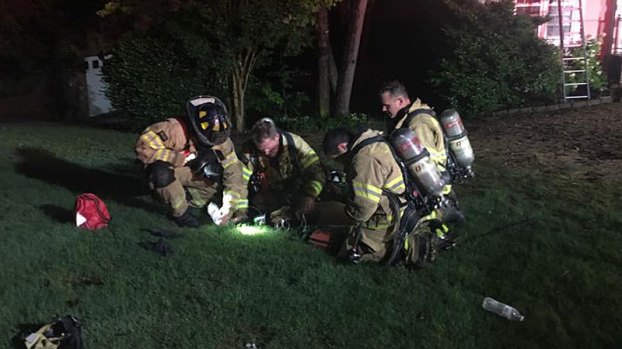 Alabaster firefighters give oxygen to one of the two dogs rescued from a burning home off Wagon Trail in the early morning hours of June 6. (Contributed/Alabaster Fire Department)

ALABASTER – A pair of dogs were healthy and happy by the time firefighters left the scene of a structure fire on the morning of June 6 after the dogs were rescued from the burning home.

Shortly after midnight on Tuesday, June 6, the Alabaster Fire Department received a call reporting a fire at a home off Wagon Trail in northern Alabaster. Fire Chief Jim Golden said the first unit arrived at the scene within three minutes, and made contact with the homeowner outside the residence.

While the homeowner was the only person in the house when the fire started, she told firefighters her two dogs were still inside the structure.

“When the first unit arrived, fire was showing from the home,” Golden said. “The first truck that got there went in and started suppressing the fire, while another crew went in and searched for the dogs.”

The firefighters were able to locate the first dog quickly, rescue it from the house and give it oxygen with pet oxygen mask purchased a few years ago with a grant from a local Girl Scout troop.

Golden said the first dog rescued from the home was in good shape when firefighters found it, but the second dog was in dire need of medical attention when the AFD located it inside the home.

“The second dog was not doing well at all,” Golden said. “We removed it from the home and began giving it oxygen and performing CPR. A short time after that, I’d say about two minutes later, the dog started moving and showing signs of life again.

“Before we left the scene, both dogs were up and playing again,” Golden added.

While one firefighter crew was working to rescue and treat the dogs, the other crew was able to extinguish the fire in the home’s kitchen before it spread to other parts of the house.

Golden credited the successful outcome to a working smoke detector in the home.

“The occupant was asleep when the fire started, and the smoke alarm woke her up. She immediately exited the home and called 911,” Golden said. “The moral of this story is to have a working smoke alarm and a plan of action.

“If there’s a fire, it’s very important to exit the structure and notify the fire department as quickly as possible. Some people will wait a little while and try to extinguish the fire themselves, and the fire just ends up spreading while the fire department has not been notified,” Golden added. “The occupant in this case did exactly what she should have done.”

By GRAHAM BROOKS / Staff Writer HELENA–“Wow that’s a ton of trash,” can be said quite literally for the city... read more