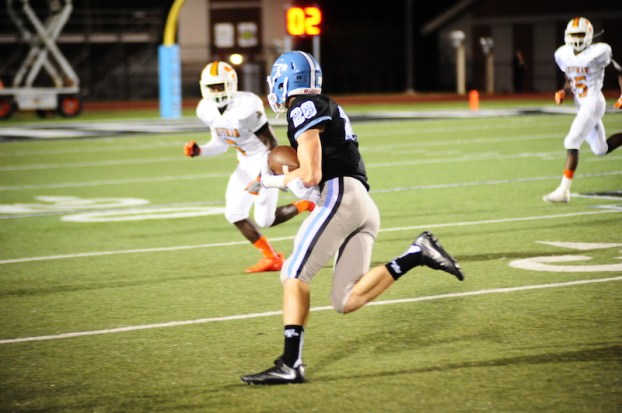 Spain Park will play one of the toughest football schedules in the state during 2017 with games against Hoover, Thompson and Mountain Brook highlighting the schedule. (File)

A third place finish in Class 7A Region 3 wasn’t bad for the 2016 Spain Park football team, but their premature exit in the first round of the playoffs to James Clemens was far from how they wanted their season to come to an end.

After competing in one of the toughest regions in all of Alabama high school football, the Jaguars finished the 2016 season rather impressively on their way to a third place finish behind No. 2 Mountain Brook and No. 1 Hoover. The Jags started the season with three straight wins over Gadsden City, Muscle Shoals and Vestavia Hills before falling to the Bucs and Spartans in back-to-back games.

Those two losses to the region’s top teams were the only two of the regular season, however, as Spain Park went on to win their final five games in a row to take the third spot by a landslide.

In 2017, they will play the same 10 teams during the regular season simply swapping home and away. SPHS will kick the season off in much more relaxing fashion as they host Gadsden City on Aug. 25, instead of making the two-hour trek to their place. They’ll follow that up with road trips to Muscle Shoals and Vestavia Hills in consecutive weeks before two weeks of redemption matchups.

Spain Park will look for its first redemption-win of the season on Sept. 15, as they play host to Hoover. It marks the first time in three years that the Jags will get to play host to the Bucs after traveling to Hoover Metropolitan Stadium the past two seasons. This is always a game circled on their schedule and they’ll definitely have even more momentum playing in front of their home crowd.

After taking on the defending 7A champion in week four, it won’t get any easier the following week as the Jags travel to Mountain Brook to square off with the Spartans marking a third straight week against an extremely tough area opponent. Last year Spain Park fell at home 23-21 in a tough game, but the Spartans are likely to be even better this year making it a tough matchup.

They’ll get a much deserved bye week during week five before kicking off the second leg of their schedule, which they swept in 2016. The Jaguars will take on Huffman (on the road), Thompson, Tuscaloosa County (on the road), Oak Mountain and Minor in those final five games.

Several of those games are very winnable, but Thompson sitting right in the middle of that schedule is considered by many to be one of the best contenders to Hoover this season and will be a very difficult game. It’s a game Spain Park only won by a field goal last season at the Warriors house.

Huffman and Tuscaloosa County should be winnable games, but Oak Mountain and Minor will be a tough close to the season. The Jags only beat the Eagles, who should be improved this season, by three last year and non-region foe Minor by 10.

All-in-all, every team in Class 7A Region 3 will have an extremely tough schedule, and although the Jags will have a stacked roster this season, they are no exception to that and will have to battle hard for a playoff spot.