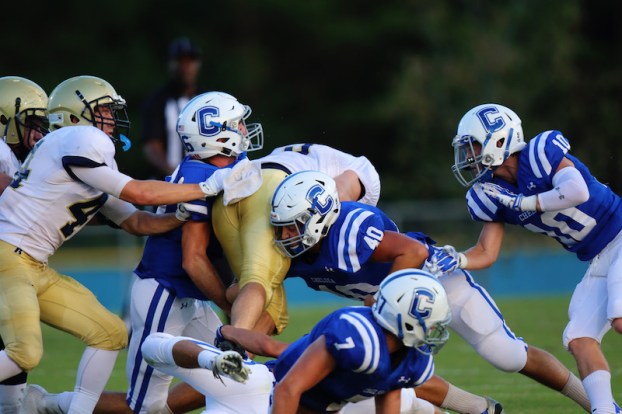 Chelsea will square off against Briarwood in the second week of the 2017 football season for the second straight year. (File)

In his first four seasons at the helm, Chelsea head coach Chris Elmore has helped the Hornets improve each year. That’s been highlighted the last two seasons by winning seven games in 2015 and eight in 2016 allowing Chelsea to make the postseason in each of those two seasons.

Last season not only marked Elmore’s most wins, but also his highest finish in Class 6A Region 3 as Chelsea finished just behind Opelika, who made it to the state championship game, in second. A lot of that success was in large part due to Matt Marquet and Zalon Reynolds in the backfield. Marquet, the starting quarterback, and Reynolds, the starting running back and county Player of the Year, helped lead Chelsea to its most points ever in a season with 455.

Both of those guys, unfortunately, have graduated meaning the Hornets have a big gap to fill on offense, which could make their schedule that much more difficult in 2017 as the Hornets look to have another improvement on their record and make it to the second round of the playoffs for the first time since 2007.

That 2017 schedule will start off with a bang, however, as the Hornets are thrown straight into the fire. They’ll kick the season off on Aug. 25, in a home game with Oak Mountain after traveling to take on the Eagles in last year’s opener.

A week later they’ll travel to take on the Briarwood Lions, who made it all the way to the semifinals of the 5A playoffs last year. While Chelsea handled both of those games with relative ease in 2016, Oak Mountain will be much improved and the Lions will be a favorite to win the 5A state championship this season with a huge chunk of their playmakers back.

They follow those two tough games with a trip to Wetumpka for their first region matchup of the season. The Indians finished third last year in region play just behind the Hornets with two losses. Chelsea took down Wetumpka 35-28 in a closely contested game at home.

It won’t get any easier after that as they play host to Benjamin Russell, who handed Chelsea one of their two losses last season in a 40-29 game. They’ll then take on Pelham at home for their third straight region game before traveling to Gardendale on Sept. 23.

Finally, after six weeks of play, the Hornets will get a well-deserved bye week. If they can somehow go 4-2 in that first half of the season, that will be a massive win and momentum boost going into their final four games.

Speaking of those final four games, just like the beginning of the season, it will kick off with a bang as the Hornets welcome Opelika to Chelsea. Opelika took down Chelsea 48-24 last season in a game that ended up determining the region champion. This will undoubtedly be a game circled this season if they come out of that first half of the season in a battle for the region crown.

That game will be followed up by road games at Chilton County and Helena to close out region play, before ending the season with a home matchup with Cullman.

While losing their two superstars will be tough, if there’s a coach that can get guys to step up and replace them it’s Elmore.

Chelsea’s full 2017 schedule is as follows: