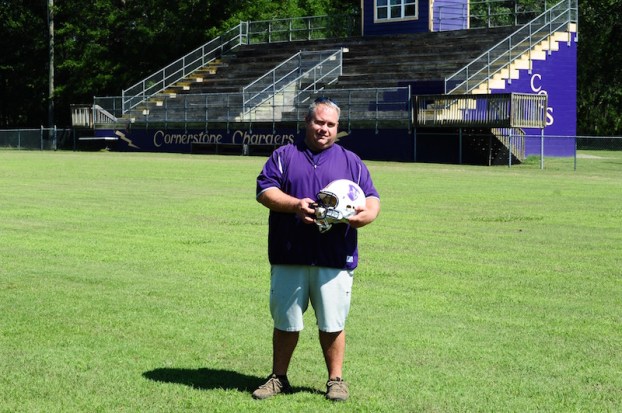 James Lee will get his first shot at being a head coach at Cornerstone Christian School after spending 17 seasons as an assistant at various locations. (Reporter photo/Alec Etheredge)

COLUMBIANA – For James Lee it’s been a long path of ups and downs with many obstacles in the way of getting to his dream, but the day has finally come where he has successfully maneuvered the long-winding trek to becoming a head football coach.

When Tim Smith moved on from Cornerstone Christian School to become the new head coach and athletic director at Evangel Christian in Alabaster, many close to Cornerstone panicked and didn’t know why he left or what to expect in his absence, but one guy stood in the limelight ready for what was to come. That guy was none other than Lee who was named the new head coach and athletic director for the Chargers.

His 17 years as an assistant coach, eight of which were spent under Smith, have come to an end and he will be the new guy leading a bunch of young student athletes in many facets of life at Cornerstone.

“This is a dream come true,” Lee said of the honor. “I remember when I first started coaching, I was like ‘One day, I want to be the coach at the University of Alabama.’ I said that then, but to be honest, this is the biggest thing to me. I can’t explain it to people, but God has really blessed me with this opportunity because there are so many more people worthy of this position.”

In his 17 years as an assistant, Lee recalled two guys that really helped him stay positive and continue to chase after his dream of being a head coach, his father and Jerry Stearns.

Stearns, you may recall, was the head football coach at Woodlawn as well as Kingwood Christian School’s inaugural head coach after leaving the Colonels to help get that program off the ground.

Lee said he spent about seven years as an assistant under one of the most historic coaches in Alabama high school football history as a member of the Lions’ coaching staff.

“There were times I just wanted to give up,” Lee said. “I had a landscape business on the side and thought about just going to do that full time, but Stearns just told me that’s not what God is calling you to do.”

Almost 10 years later it turns out Stearns was right as all of Lee’s hard work over the years has finally paid off.

When his father started struggling with Alzheimer’s disease, Stearns stepped in and became a “father figure” helping Lee through some tough times.

“Me and my dad had a conversation when I first started coaching,” Lee said. “He told me that one day I may have the opportunity to be a head coach.”

Two years ago, Lee’s father passed away, but he knows his father is looking down so proud of what his son has become.

“Since taking over I have thought every day about how he has the best seat in the house now,” Lee said. “He’s in heaven looking down on me and it really means a lot to me and my family to have this moment.”

The heartbreaking part of it all is that his other “father figure,” in coach Stearns, passed away just a month later to really put Lee through a tough time as two of his biggest role models were no longer here.

“It had a big impact on me,” Lee said. “But I still have those memories and life lessons that they taught me, which means the world. I still can hear coach Stearns behind me judging certain play calls on defense.”

While they are no longer able to help him on this earth, the hard work his father instilled in him and the coaching techniques Stearns taught him will pay off as he embarks on the journey of his first head coaching gig.

This year, Cornerstone will lose its top three offensive playmakers in Jo-Jo Joiner, Logan Tucker and Tyler McNamee, but that doesn’t concern the head coach one bit.

“The kids are on board,” Lee said. “We’ve got some hard working kids and they have the biggest hearts, it’s amazing, I’ve never seen the heart these kids have in any of my previous years of coaching.”

When Smith left for Evangel, it definitely shocked into the kids and hurt them, but they have responded and are ready to go to bat for their new coach whom they have known since elementary school.

“With me being here as long as I’ve been here, they’ve kind of just jumped in and said ‘hey it’s just another day,” Lee said.

There’s one lesson Lee hopes to teach his kids during his first season, and, it’s something much bigger than football and continuing the Chargers’ success.

“I think you’ll find that I’m going to work extremely hard to be the very best that we can possibly be,” Lee said. “But I want to make sure these kids know who Jesus is before they leave here. That’s what our mission is. If we win a game that’s great, but at the end of the day we all get to heaven and God’s not going to say, ‘James how many wins did you have,’ but instead he’ll ask how many souls did you save?”

He went on to say that this bunch of kids is going to do something special and that’s not just him blowing smoke.

Time will tell how Lee will fare as a high school football head coach, but with the background he has and the work ethic instilled in him, it’s probably a safe bet to assume he will continue the storied tradition of winning at Cornerstone as his father and coach Stearns gleam with pride from the best seats in the house.