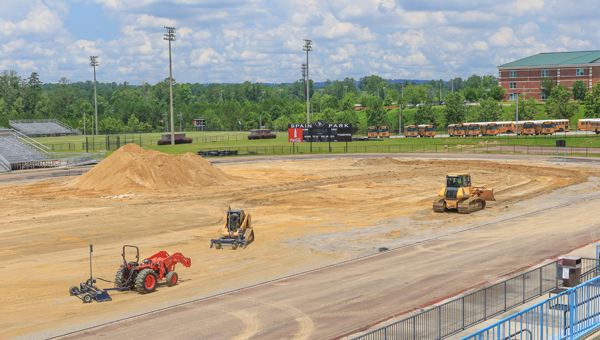 Work has begun to remove the football field and running track at Spain Park High School before new surfaces are installed prior to the start of the new school year in August. (FOR THE REPORTER/DAWN HARRISON)

HOOVER – Spain Park High School will have a new football field surface and running track when school starts back in August.

The field and track were closed May 20 as the renovations began.

SPHS Athletic Director Patrick Kellogg said the project is expected to be completed by Aug. 1.

“Of course, that is weather permitting,” Kellogg said.

The work is being done during the summer to avoid conflicts with school sports.

The Spain Park youth summer football camp would usually be held on the game field, but the school has two practice fields that will be utilized instead, Kellogg said.

“It really wasn’t invasive at all,” Kellogg said about the work.

The track that is being replaced was the original track installed when the school opened in 2001.

“We have well outlived the lifespan of the track,” Kellogg said. “You started to see cracks, and there was patchwork being done.”

A new polyurethane track will replace the previous latex track.

The school’s football field, meanwhile, was natural grass for the team’s first season in 2002.

Synthetic turf was installed in 2007, and the new surface will be a similar but upgraded material.

The renovations to the field and track are expected to cost $1.4 million.

Kellogg said he thinks fans will be excited to see the finished product and added that he thinks Spain Park and Hoover High School will have the only two high school stadiums in Alabama with a shock pad underneath the turf.

“It will be absolutely state-of-the-art,” Kellogg said.