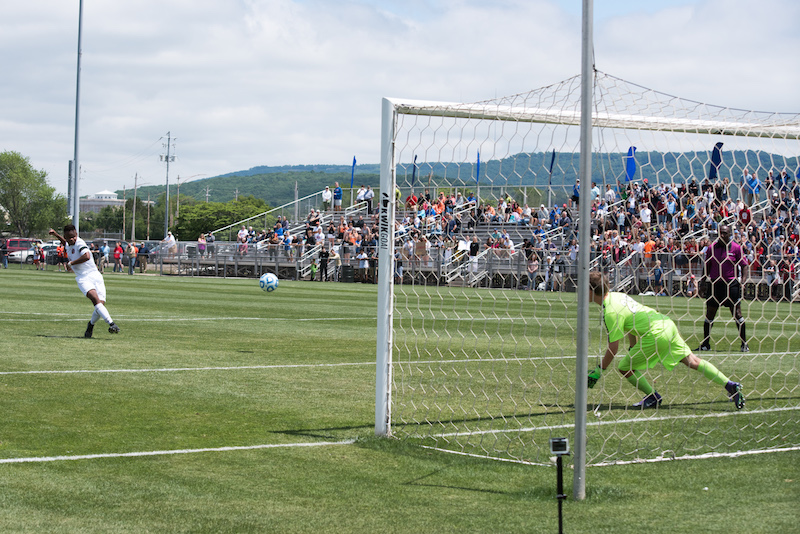 Oak Mountain’s Kennedy Davis punches in the game-winning PK against Davidson High School in the 2017 state championship game. Davis was named as the 2017 Gatorade Alabama Boys Soccer Player of the Year for his efforts during a strong senior campaign. (Reporter photo/Keith McCoy)

NORTH SHELBY — In its 32nd year of honoring the nation’s best high school athletes, The Gatorade Company announced on Monday, June 12, that Kennedy Davis of Oak Mountain High School was named its 2016-17 Gatorade Alabama Boys Soccer Player of the Year.

The award, which recognizes not only outstanding athletic excellence, but also high standards of academic achievement and exemplary character demonstrated on and off the field, distinguishes Davis as Alabama’s best high school boys soccer player. Now a finalist for the prestigious Gatorade National Boys Soccer Player of the Year award to be announced in June.

The 5-foot-9, 155-pound senior midfielder led the Eagles to a 20-4-4 record and a third straight Class 7A state championship this past season, which also marked the seventh title in 12 years for Oak Mountain. Davis scored 22 goals and passed for 12 assists.

A two-time First Team All-State selection, he concluded his prep soccer career with 46 goals and 30 assists, but none were any bigger than him punching through the game-winning PK in this year’s state championship game to finish of his senior season with a storybook ending.

Aside from all of his evident soccer and leadership skills on the field, Davis is also an exemplary character off the field having volunteered locally at the Bell Center Youth Alliance with special needs children and as a youth soccer coach and referee.

While he might look like the smartest player on the soccer field, he takes that and proves it in the classroom holding a weighted GPA of 4.05 at the completion of his high school degree. He will now take his talent on both fronts and attend Ivy League school Dartmouth College, where he will play soccer, beginning this fall.

Davis joins Chandler Stroupe, 2012-13, and Chandler Hoffman, both in 2007-08 and 2008-09 as Gatorade Alabama Boys Soccer Players of the Year from Oak Mountain High School.

As a Gatorade Player of the Year, Davis will be able to select a national or local youth sports organization to receive a grant as part of the Gatorade Play It Forward program. Every Gatorade Player of the Year state winner receives a $1,000 grant to donate and will have the opportunity to enter for an additional $10,000 spotlight grant by writing a brief essay explaining why their selected organization deserves additional support. 12 spotlight grants — one for each sport — will be announced throughout the year.