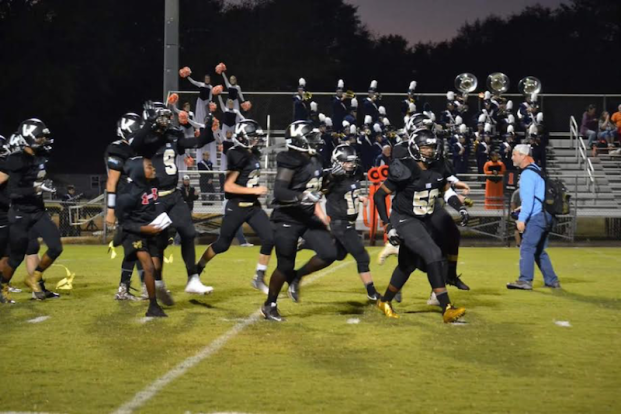 Vincent’s Chris Hardie, No. 56, leads his team onto the field during the 2016-17 football season. He has earned an invite to the Blue Grey Combine at AT&T Stadium in Dallas Texas. (Contributed)

Joining Landon Guy at AT&T Stadium in Dallas, Texas for the Blue-Grey All-American Super Combine June 24-25 will be a second player from Shelby County. Chris Hardie, a rising junior from Vincent High School who plays on both the offensive and defensive line, was selected as a defensive lineman/end to attend the combine held at the home of the Dallas Cowboys, also known as “Jerry World.”

Hardie was chosen to represent Vincent after competing and wowing scouts at the Tennessee Regional Combine in Nashville, Tennessee.

“I am excited about this opportunity,” Hardie said.  “As I enter my junior year, I am looking to get my name out to the recruiters.  It would be a dream come true to play at the next level.”

Hardie will enter his junior year for an improving Yellow Jackets team as a second-year starter at defensive end and will also see some action on offense at the fullback position.

“I am so happy that he has the opportunity to showcase his talents on a national level, and I am so proud of him,” Hardie’s mom Katrina Pope said.  “He plays sports year round and his summer consists of football workouts, basketball practice for the high school and he plays on the Alabama Flames AAU basketball team.  It definitely takes a special person to give up their summer preparing for the upcoming seasons, conditioning and practicing.”

Hardie is one of those athletes taking advantage of his skills by playing multiple sports and competing year round, something that is continuing to prove a big deal amongst high school standouts.

If Hardie performs well enough in Dallas, he will be in a position to be selected to play in one of the Blue-Grey National All-American Bowls played at four NFL locations:  Dallas Cowboys’ AT&T Stadium, Tampa Bay Buccaneers’ Raymond James Stadium, Jacksonville Jaguars’ EverBank Field or San Francisco 49ers’ Levi’s Stadium.

While making it to the combine is an honor in itself, Hardie will compete as hard as he can during that opportunity to further this once in a lifetime chance.

It’s an experience he can not only use going forward in his own career, but something he can bring back with him to share with his teammates as he looks to help his team take that next step on the gridiron during the 2017 season.