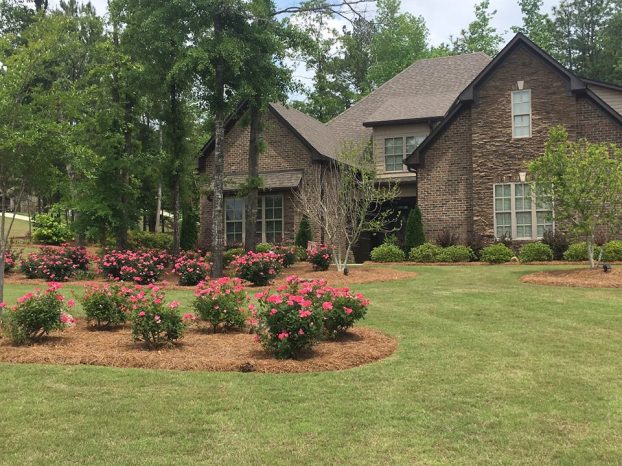 The Pelham Beautification Board recently named Tom and Barbara Phelps, residents at 236 Grey Oaks Court, as its May/June 2017 residential Yard of the Month.

Pelham Beautification Board names Yard of the Month

PELHAM – The Pelham Beautification Board recently named Tom and Barbara Phelps, residents at 236 Grey Oaks Court, as its May/June 2017 residential Yard of the Month.

The Phelps have lived in Pelham since 1985 and raised their two children in the city. Tom Phelps works at an insurance company and Barbara Phelps works for a law firm in Hoover.

In 2014, they decided to build in the Grey Oaks neighborhood and played a primary role in picking out all of the shrubbery in front of their home, which was built on a corner lot.

They chose Indian Hawthorne for its fullness and Loropetalum for the red color in the front yard. The natural area in the front yard provides a blank slate surrounded by grass. Tom Phelps began designing the yard by first creating a border with Cleyra plants, filling in the bank with Blue Rug Juniper and then over time they have added several other natural areas.

The areas feature trees such as Willow Oak and Nuttail Oak for height, and Crepe Myrtles, Maple Trees and pink Knock Out Roses for color. Down the side of the home, they chose Creeping Gardenias for both color and fragrance. Tea Olives, Hydrangeas and Forsythia provide color and fragrance to the back yard.

They are constantly on the lookout for new shrubs, plants and trees for the yard. Tom Phelps has been known to take a photo and hopefully a clipping of ones he likes. After doing a bit of research to make sure it will thrive in their yard, he finds a place for it.

According to the Phelps, the yard is a work in progress and can be a challenge. Some of the shrubs and trees were lost in last year’s drought and they are in the midst of replacing some of those. They love their yard and were so excited that others have noticed as well.

The Beautification Board encouraged residents to drive by and get inspired.

The Triad Building, at 100 Tony Holmes Drive, was named the May/June commercial Yard of the Month by the board.

To submit a nomination for yard of the month, go to Pelhamalabama.gov and click on the Beautification Board tab.