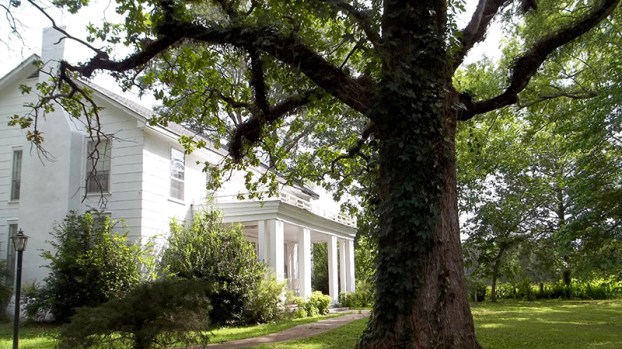 By NANCY WILSTACH / Special to the Reporter
MONTEVALLO – Development of Montevallo’s newest park, Shoal Creek, has stalled temporarily because of what may lie underground.

The park is the former Mahler Farm on Alabama 119 which was left to the city as a bequest in the will of Elizabeth Mahler.  Known as the Perry Hill-Mahler Farm, the 167 acres lie along the winding Shoal Creek to the north of the downtown area.  The farm offers an array of picturesque spots that, although the park is not officially open to the public, already have attracted artists and photographers.

When the Montevallo City Council met June 12, it voted unanimously to spend $6,400 for further archeological testing on the site because an initial inspection had turned up artifacts that merit more examination.

That first inspection was part of the routine examination of land about to be developed for public use. This second, closer look focuses on approximately half an acre that is the intended location of the park’s pavilion.  Conducting the survey is Bonnie L. Gums, senior archaeologist with the University of South Alabama’s Center for Archaeological Studies.

The study also is intended to evaluate the Mahler Farm for possible inclusion in the National Register of Historic Places.

According to Gums’s report on the initial work that was given to Council members, the farm was established in 1836 by Sion Jacob Perry, and the Perry family owned it for 110 years.  In 1946 ownership passed to the Mahler family until in 2013, the surviving member of that family, Miss Mahler, donated the property to the city with instructions that it become a public park.

The bequest included funds for its development; the park joins Orr Park, Stephens Park and Dailey Park in providing the city with a variety of venues for public outdoor recreation.

However, long before the Perrys or the Mahlers arrived on the scene, Gums said, there most likely was a small community of prehistoric humans living on a little knoll above a bend in the creek.

“We found fragments such as those left from making stone tools,” she said.  “It probably was a little village on a little rise so that it was not in the flood plain.” Gums and her crew found evidence of another site across the creek where pieces of Indian pottery were unearthed.

The Phase 2 examination will not take long, she said. She will make some small shovel tests in the area where initial examinations in March turned up the tool-making remnants. The soil will be screened for items as small as a quarter-inch in diameter. Gums said that she did not expect the testing to take more than two days, “unless we find something spectacular.”

Pelham Beautification Board names Yard of the Month