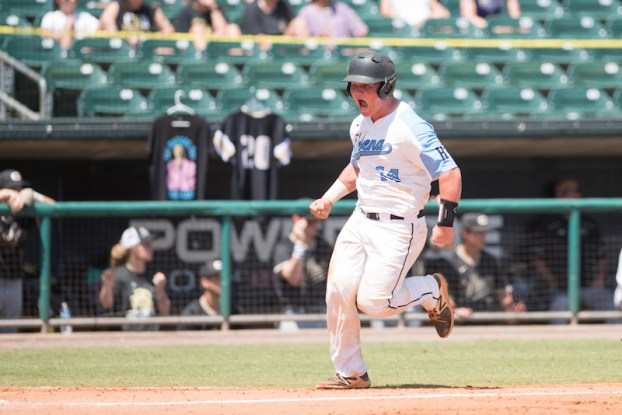 Helena’s Sam Praytor was named as the 6A Player of the Year in the state and finished fifth in the Super 10 voting, which places the top 10 players from all high schools in the state. (Reporter photo/Keith McCoy)

The ASWA released its 2017 All-State baseball list on Sunday, June 11, and an unbelievable 17 players from across Shelby County found themselves as one of the elite baseball players in the state. That number of 17 increased by eight from last year’s number of nine.

Shelby County had at least one player present in four different classifications including seven in Class 6A, five in Class 5A, four in Class 7A and one in Class 2A.

Breaking it down a step further, four different teams had multiple players make the list. Helena led the way with a jaw-dropping five players named to the team, while Oak Mountain had three and Chelsea and Calera each had two.

It came as no surprise after looking over the stats when we put together the All-County list as all of these players were on that team somewhere as well, but to see 17 players from this county alone get so much recognition puts the perfect cap on the end of a historic 2017 baseball season in Shelby County.

Starting in the 7A classification, where Oak Mountain dominated, the list saw one first team honoree in the Eagles’ Ethan Holsombeck. The 7A team also saw another Oak Mountain player in Gene Hurst, who led the county with a .55 ERA this season. Honorable mentions included Thompson first baseman Chris Lewis and Eagles third baseman John McDonald.

The 6A classification saw the state-champion Helena Huskies give strong representation to no one’s surprise. Troy Cordrey, pitcher, and Sam Praytor, catcher, were both easy first team selections.

Sam Praytor also had a strong individual performance when it came to post season accolades as he took home the 6A Hitter of the Year award and finished fifth in the voting for the Super 10 receiving 57 votes. He finished behind Cody Greenhill (Russellville), Jacob Heatherly (Cullman), Bubba Thompson (McGill-Toolen) and Tanner Burns (Decatur) all of whom are strong MLB Draft prospects putting Praytor in great company.

Continuing down the 6A list, Landon Green and Nash Adams, also of Helena, were named as a pitcher and an outfielder, respectively, to the second team along with Chelsea catcher Jacob Burback, which gave the county the top two catchers in the state this season.

Nich Ragsdale, another outfielder for the Huskies, and Clay DeWeese, a second baseman for the Hornets, were both named as honorable mention members to the team.

Sliding down to 5A, the county’s co-players of the year can be found in Calera’s Jacob Smith and Briarwood’s Sam Strickland. Smith was named as a member of the first team due most likely to his awe-inspiring strikeout number of 123 during the 2017 season. Strickland, who finished second in the county with an ERA of .61, was named as the second team pitcher.

Also named to the 5A All-State team were two additional Briarwood players in Carson Eddy and Cole Steadman and one more Calera player in Quin Darius Crew. Eddy was named as a first team utility player, while Steadman was named as a second team outfielder.

Crew picked up a second team designated hitter spot as just a freshman after hitting .467 at the plate during the 2017 season.

The final of the 17 county players to make the list was none other than Vincent second baseman Saylor Carroll. Carroll was named as a 2A honorable mention player after hitting .340 at the plate during his senior season with an on-base percentage of .418.

Sam Praytor, catcher, Helena. (6A Hitter of the Year)