A Revolutionary Cause for Celebration

As I write this, America has just celebrated another Memorial Day – observing what is known as the official start to summer. Stores have offered anything and everything in red, white and blue, and many houses display flags still stiff with newness. Social networking sites and mainstream media reminded citizens that Memorial Day isn’t just a great excuse for a trip to the beach or the lake, but a solemn occasion commemorating those who paid the greatest sacrifice in defense of liberty. 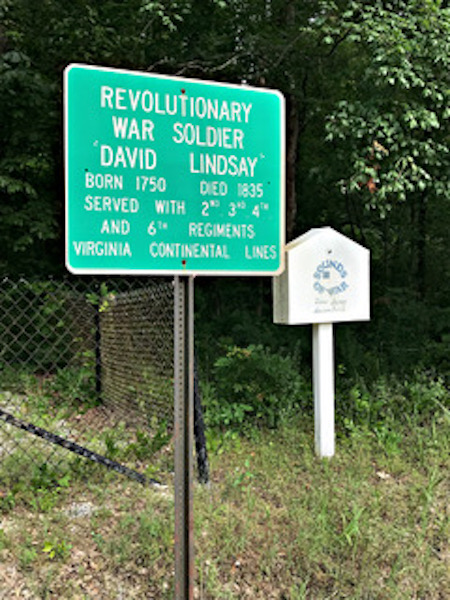 Grave of Patriot and Early Settler, David Lindsay, has historic marker on Highway 17 in Maylene. (Contributed)

Shelby County is home to many historic cemeteries that hold the graves of brave men and women who died defending our freedom. Perhaps the most moving of them all is the National Cemetery in Montevallo. Located on Alabama 119 just past the American Village, it is one of the places specifically designated by the federal government to provide a final resting place for veterans fulfilling certain service requirements. If you haven’t visited this sacred place, you should certainly plan to do it during the summer’s patriotic seasons – Flag Day on June 14 or Independence Day on July 4.

The National Cemetery, first chartered in 2007, is one of the newest places to hold the remains of patriots – but there is a single grave up the road in the Maylene-Alabaster area that honors an early settler and participant in the war that gave birth to America. Since it sits by itself and is not part of an established cemetery, many people drive by it every day not realizing they are in the presence of American history.

Private David Lindsay came to Alabama in the same way that most of the earliest settlers did – from New England during the Great Migration after the Revolutionary War – by way of the “National Road” through North Carolina, then Tennessee and, finally, to Alabama. Lindsay was born in Pennsylvania in 1750 and served in the 2nd, 3rd, 4th and 6th Regiments of the Virginia Continental Army. For his service, he was given a land bounty including 100 acres in North Carolina. In giving free land to the veterans, the federal government encouraged westward expansion to enlarge the new nation.

He and his family first settled around Madison, Alabama, but they eventually moved further south

and by 1820 were living in Shelby County. His son, Elijah, owned a homestead in Maylene with a family burial plot located on it. The homestead itself disappeared long ago – but extensive research in the 1950s identified the graves of David and his wife, Mary. They lie next to Shelby County 17 about 5 miles south of Helena. There is a historic marker with a small fenced area containing memorial stones for the couple.

In today’s busy world, it can be quite easy to forget those who paved the way for us. But, we owe a great debt to forefathers like David Lindsay who gave us this land of liberty – and to our heroes of today who still sacrifice to keep it free.

By RENE’ DAY / Community Columnist It caught my eye at a recent estate sale. I must admit the plain... read more