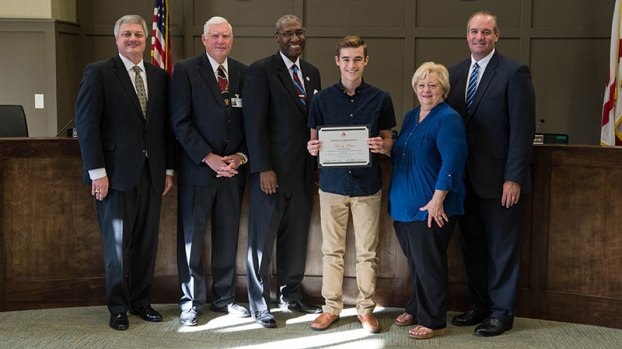 Thompson High School graduate Brady Talbert, third from right, is recognized by Alabaster School Board members during a June 12 meeting for his myriad accomplishments at the school. (Reporter Photo/Neal Wagner)

ALABASTER – Locals may see a Thompson High School graduate anchoring a television newscast in the future, after he became one of the most decorated students in Alabama scholastic journalism history during his time at the school.

Brady Talbert, who graduated from THS last month, will attend Troy University in the fall to major in journalism. However, he made one last appearance at his hometown school board on June 12 to add one more recognition to this résumé.

During the Alabaster Board of Education meeting, the School Board members presented a certificate honoring Talbert for his accomplishments in the THS broadcast journalism department.

Talbert was the first student in the state to earn all three senior awards, and represented Alabama at the National Scholastic Press Association Convention.

In late June, Talbert and three other local students will travel to the National SkillsUSA competition, where they will represent Alabama in the competition’s broadcast journalism category.

COLUMBIANA- An Alabaster woman was recently arrested and charged with theft in the first degree after she allegedly stole thousands... read more