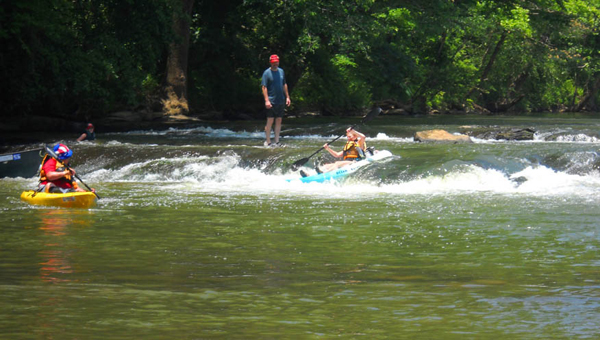 COLUMBIANA – Shelby County could soon partner with the Alabama Scenic River Trail to offer campsites for paddlers in the county.

Fred Couch, founder and president of ASRT, addressed the Shelby County Commission at its meeting on Monday, June 12, about the possibility of campsites in the county.

“I’m not here to ask you for money, I’m here to bring you money,” Couch said, citing a study of the economic impact water trails have on rural communities.

There is a 60-mile stretch of the Coosa River with no campsites, Couch said, including 52 miles of property owned by the county.

Couch said county parks, such as Beeswax, or marinas are potential locations for campsites, which would be marked and publicized as available for public use.

Commissioners expressed an interest in partnering with the Alabama Scenic River Trail, and County Manager Alex Dudchock said discussions are ongoing but that county officials must revise protocols for any potential sites and be prepared to deal with unauthorized uses of the areas.

“For every positive, we have to be ready for the negative,” Dudchcock said.

The Commission also received a report on the 2017 Shelby County Senior Picnic.

According to Reginald Holloway, manager of community services, 1,075 reservations were received as organizers moved to an online reservation system.

More than 800 seniors attended the event, which was held at the Shelby County Exhibition Center in Columbiana after the threat of inclement weather forced the event to be moved from American Village. Dudchock said next year’s picnic will be held at the McChesney Student Activity Center at the University of Montevallo.

•Heard from Dudchock during the County Manager’s Report that Wayne Davis Construction was the low bidder, at about $670,000, for a project to add 12 hangars at the Shelby County Airport.

•Awarded a bid to Wayne Davis Construction, the sole responsive bidder, for an equestrian barn roof at Oak Mountain State Park. The base bid was $24,800, plus $1,800 for each additional 12-foot section.

•Awarded a bid for paper products to Budget Janitorial, which submitted lower bids for most products, including bath tissue, paper towels and hand soap.

•Awarded bids for telephony equipment to the two responsive bidders, Ambit and Logista, to the lowest bidders for several items.

•Awarded bids for printed products to Southern Engraving, Govt Forms and Supplies, and Maridan Corp, with the bids going to the lowest bidder for several items including letterhead, envelopes and business cards.

•Awarded a bid for laundry supplies for use at Juvenile Detention to the lowest overall responsive bidder, Dade Paper Company.

Shelby County is most educated county in Alabama