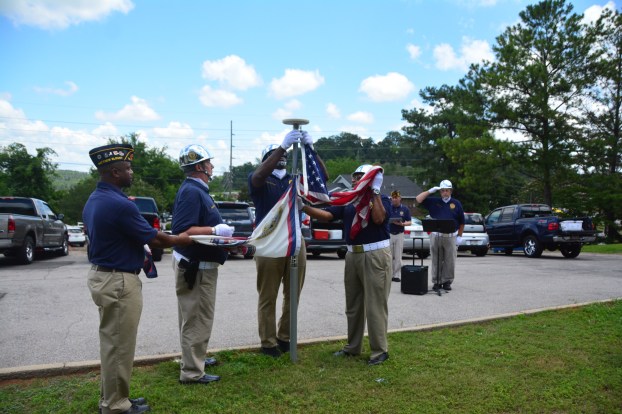 The American Legion Post 555 Honor Guard removes the old flag that was flying outside of Gardens of Pelham. (Reporter photo/Briana Harris)

Gardens of Pelham is home to 16 senior citizens. Facility administrator Mary Neff said the residents of the community are very patriotic as most of them are veterans or the spouse of a veteran. That’s why a military flag flies beneath the American flag on the facility’s flagpole, Neff added.

“This really does mean so much to our residents,” Neff said. “This is the first time the Legion has performed a ceremony for us and they did a great job. This was extremely impressive and I know it meant a lot to the residents.”

Prior to the start of the ceremony, Post 555 recognized the veterans in attendance and handed out small American flags.

As the old flag was lowered, the “Retreat” bugle call played, Paschal said. He said “Retreat” used to be played to signal the end of the official duty day.

It has grown to become the bugle call, which is a short song, that is played when lowering a flag.

Historically, bugle calls eliminated confusion on the battlefield. Each bugle call was a signal of what action to take.

Post member Frank Lakotich said the flag retirements are important because patriotism is something that must be taught.

“We do this to teach others how to honor the legacy of the flag and what it stands for,” he said.