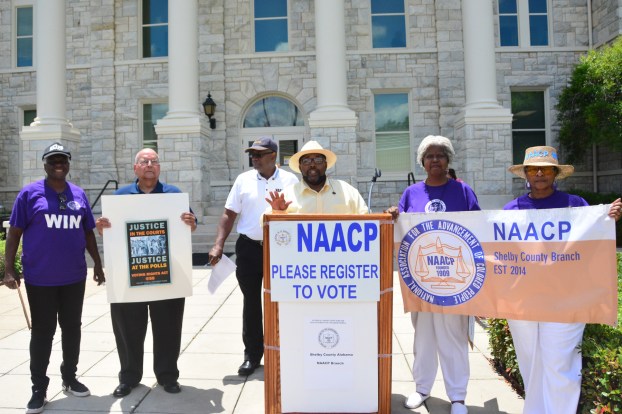 Members of the Alabama and Shelby County NAACP gather outside of the Shelby County Courthouse at the beginning of the fourth annual Restore the Vote Weekend. (Reporter photo/Amalia Kortright)

COLUMBIANA- The Shelby County chapter of the NAACP held its fourth annual Restore the Vote Weekend from Friday, June 9, to Sunday, June 11, at several locations in Columbiana and Alabaster.

Restore the Vote Weekend began on Friday with a press conference at the Shelby County Courthouse in Columbiana and ended with a Sunday church service at Liberty Baptist Church in Alabaster.

According to a press release from the Alabama NAACP, the rally has been held every year since the 2013 U.S. Supreme Court ruling in Shelby County (Alabama) v. Holder, which ruled Section 4 of the Voting Rights Act of 1965 unconstitutional.

“It’s time to take back what was stolen from us,” Dukes said.

“There has been a long history of voter discrimination, voter intimidation and voter suppression, which had a significant impact on the 2016 Presidential Election,” Simelton said. “The U. S. Supreme Court must see this and Restore Section 4 of the Voting Rights Act. Voting is not just a fundamental right afforded to every citizen, but it is the voice of the people and its restoration is worth every effort of our fight.”

COLUMBIANA – Shelby County could soon partner with the Alabama Scenic River Trail to offer campsites for paddlers in the... read more