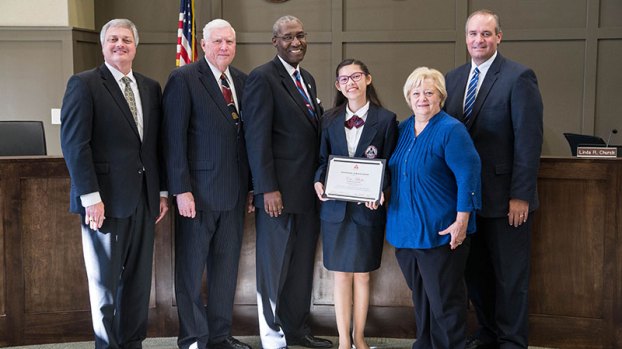 Thompson High School student Eris Mihelic, third from right, is honored by members of the Alabaster Board of Education during a June 12 meeting. (Reporter Photo/Neal Wagner)

ALABASTER – Thompson High School student Eris Mihelic on June 12 gave members of the Alabaster Board of Education a firsthand look at the skills she has developed during her time serving in leadership positions with the Health Occupations Students of America over the past few years.

After receiving a certificate from School Board members recognizing her leadership roles with HOSA since 2015, Mihelic didn’t hesitate to take the floor and eloquently thank the city’s school leaders for their support.

“Without their support, none of these (school) organizations would be functional or able to present students the opportunities they presently do. It is because of their dedication and the dedication of so many others like them nationwide that HOSA Future Health Professionals has been able to grow and prosper for over 40 years,” Mihelic said. “Students involved with HOSA are able to compete on a state, national and international level. They are also given the opportunity to lead their fellow students and run the organization.”

From 2015-2016, Mihelic served as the HOSA vice president of membership and competitive events, and from 2016-2017, she served as the organization’s first vice president and secretary. Through serving in the roles, Mihelic has been traveling around the state and nation while speaking about the benefits of HOSA.

In late June, Mihelic will be running for an international HOSA officer position at the organization’s international conference in Orlando. A few days before she was set to depart for Orlando, School Board members wished her well, and thanked her for representing Alabaster through her HOSA leadership positions.

“HOSA health science classes allow students to pursue their interests in the health care field through hands-on skills, various leadership roles and networking opportunities with like-minded students and health care professionals,” Mihelic said. “Students that go through health science programs are more knowledgeable going into college and already have experience in clinical settings, putting them ahead of other students. By providing students with these classes, schools are developing better leaders and health professionals”