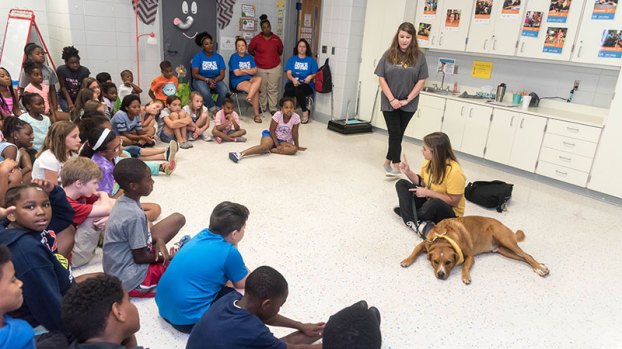 ALABASTER – A few dozen students were full of questions, and some said they may have found their future career paths, during the YMCA Power Scholars Academy’s career day on June 15 at Meadow View Elementary School.

The career day came about midway through the five-week Power Scholars Academy, and featured speakers from the Hand in Paw animal therapy company and Shelby County Newspapers Inc.

Camp leader Kawanna Brickler said the camp is designed to combat learning loss for area children during the summer months, and said the kids often learn without even knowing it.

“We are just trying to bridge that gap so there isn’t as much learning loss,” Brickler said. “It’s structured a little like school, but we try to make sure it doesn’t feel like school. It’s all game-based, so they are learning through games.”

This summer marks the YMCA of Greater Birmingham’s second year to host the camp for Shelby County kids. At the end of the school year, local schools nominated kids for the camp who were at risk for summer learning loss, and offered applications for other kids interested in attending. This year’s camp included rising third-through-fifth-graders from Alabaster and Montevallo.

At the beginning of the five-week camp, all of the kids completed an assessment to determine where they stood academically, and will complete an end-of-course assessment when the camp is over.

“We did pre-testing on math and reading at the beginning of the course, and will see how much they’ve improved after they take the assessment at the end of the course,” said Alabaster teacher Sonia Jones. “Last year, I definitely felt like there was an improvement over the course of the program. Preventing that learning loss is really a big part of it.”

Since beginning the camp, the kids have held daily enrichment sessions, and even took a field trip