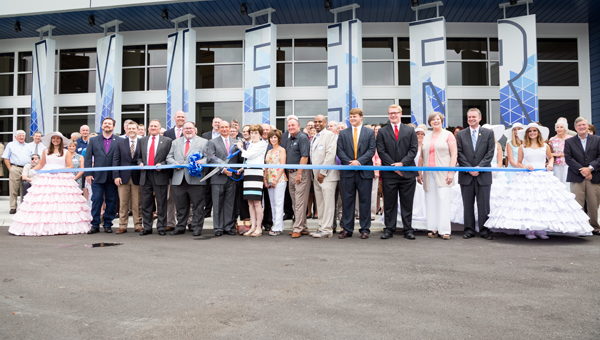 A ceremonial ribbon cutting was held on Friday, June 16, to mark the grand opening of the Finley Center in Hoover’s Metropolitan Complex. (FOR THE REPORTER/COLETON PHILLIPS)

Brasfield & Gorrie began construction in January 2016, and work was completed in May, just in time for the new Southeastern Conference Baseball Tournament FanFest.

The project also includes an expansion of the recreational vehicle park.

The celebration kicked off with Hoover Mayor Frank Brocato and Diane Finley, wife of Coach Bob Finley, cutting the ribbon before guests gathered inside the 155,000-square-foot event center for the grand opening ceremony.

Guests entered the new facility greeted by Hoover Bells, hostesses for the city, and received gift bags with Finley Center goodies including shirts, cups, pens and a limited edition can of Coca-Cola with the center’s name along the side.

“When I first walked in, I was overwhelmed to see everyone here and their excitement. I could not be more thrilled,” Brocato said.

During the ceremony, recipients of the 2017 Finley award, Doug Henze and Austin Carter, led the audience in the Pledge of Allegiance. Brocato then spoke on the impact of the center on Hoover.

Also speaking were Brian Jones of the Alabama Tourism Department; Rickey Phillips, the Hoover Parks and Recreation Board president; and John Oros, president of the Greater Birmingham Convention and Visitors Bureau.

Diane Finley spoke about the legacy of her husband Bob Finley and said the Finley family was deeply honored to have her husband memorialized in such a way.

Bob Finley, a longtime head coach at Hoover’s W.A. Berry High School, is remembered by his friends, family and students as a man who taught as much about integrity as he did about football and basketball. The much-loved coach died suddenly, shortly before the opening of Hoover High School in 1994.

The 155,000-square-foot indoor events center includes more than 83,000 square feet of uninterrupted multi-court space to fit as many as 11 basketball or 17 volleyball courts, a 1/4-mile walking track, a climbing attraction called a Clip N’ Climb and a food court.

“The events center is multi-use and capable of hosting a variety of functions and sporting activities,” said Monty Jones Jr., general manager of the Hoover Metropolitan Complex.

But there is much more to this state-of-the-art facility than just sports. The Finley Center has space for 300-plus trade show booths, and the uninterrupted floor space can transform into smaller gathering spaces and be decorated and customized for events, parties, gatherings and more.

After the ceremony, officials lifted the partitions where one of the spaces was set with tables for a reception lunch and tour of the center.

One of the first events hosted at Finley was “Made South” on June 2-3. The event brought more 100 vendors to the Finley Center by showcasing artisan goods, food, drink, music and art made in the South.

The Finley Center was also the site of the new FanFest in May. FanFest included driving simulators, electronic darts, arcade games, golf simulators, inflatables and a zip line.

Construction of Phase II of the project continues and will include five NCAA regulation-sized soccer/football/lacrosse fields that can be converted to 10 youth athletic fields and five regulation-sized baseball/softball fields.

Four fields will have artificial turf, and one will have natural grass. Sixteen tennis courts with a pro shop are also in the plans. Additionally, Phase II includes a playground, event lawn and a splash pad. Additional parking in Phase II will make room for 5,000 onsite spaces for visitors.

The Greater Birmingham Convention and Visitors Bureau estimates an economic impact for the city of Hoover to be between $27 million and $33 million. The facility is also slated to bring in around 125 new jobs to the region.

“As a leading builder of sports and entertainment projects across the Southeast, we are seeing a growing trend of multipurpose sports facilities. The Finley Center is on the leading edge of that trend and will have a significant economic impact for the city,” said Stephen Franklin, senior project manager for Brasfield & Gorrie.

“We have what people are going to be looking for,” Brocato said. “This will bring competitive tournaments, great sporting tradition, non-profit fundraisers, business gathering and more to Hoover.”

By GRAHAM BROOKS / Staff Writer HELENA–Children interested in learning more about the basics and techniques of rifle shooting will... read more