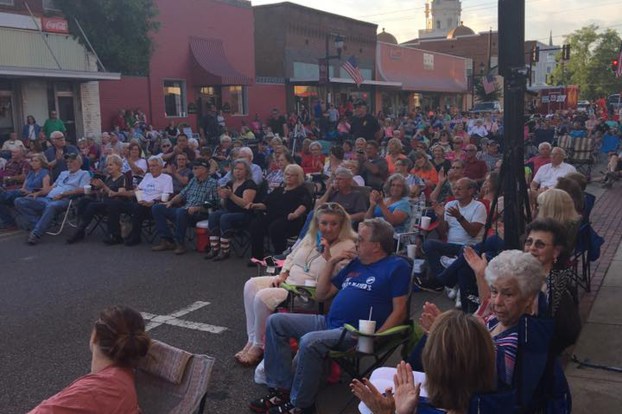 A large crowd gathers on Main Street to enjoy free live music at one of several Music on Main events throughout May and June.

COLUMBIANA- From the beginning of May to last week, people from all over Shelby County set up folding chairs along South Main Street and enjoyed free live music at this year’s Music on Main.

The final Music on Main event of the year concluded on the evening of Friday, June 16, with a performance from local band Slingshot. While Music on Main was originally scheduled to take place on every Friday in May, it was later extended to last through three weeks in June.

According to Feldman, Main Street Columbiana selected newer bands to add something different, while the city brought back local favorites who are popular among Columbiana residents.

While Montevallo resident Debbie Smith said she missed some of the bands that have played at Music on Main in earlier years, she said she was glad to see everyone come out for this event.

“This is such a great thing for the community to come together. There’s such little clean fun anymore,” Smith said. “We love it and hope it continues.”

While one of the events was canceled and another was held inside Bernie’s on Main Street due to inclement weather, Feldman said this year’s Music on Main drew a sizeable crowd each weekend. Feldman said Music on Main didn’t raise money for any specific organization, but attracted visitors to the local shops and restaurants that Columbiana has to offer.

“We had a lot of our merchants open, and restaurants came and set up shop on Main Street. This helps people support local businesses,” Feldman said.

Slingshot vocalist and bassist Mike Morgan said he and his band-mates said they were proud to play as the 2017 Music on Main’s final act.

“These folks over here love to dance,” Morgan said. “Columbiana has done a really good job of putting this on.”

According to Morgan, he and his band-mates, Rick Fortenberry, Bill Barron and Jay Michaels have played at Music on Main every year since its inception, and they have enjoyed watching it attract more people.

“It started off slow in the beginning, but the merchants and the city have really worked hard on this,” Morgan said. “Everybody is smiling. Columbiana is a sweet little town with some of the friendliest people you will meet in the south.”

Feldman said sponsoring part of this year’s Music on Main was a unique experience, and she is excited for Main Street Columbiana to have a hand in organizing next year’s events.

“How many other towns are there where you can close down the street to listen to live music?” Feldman said. “We’re looking forward to next year, and we’re already starting to look at booking bands.”