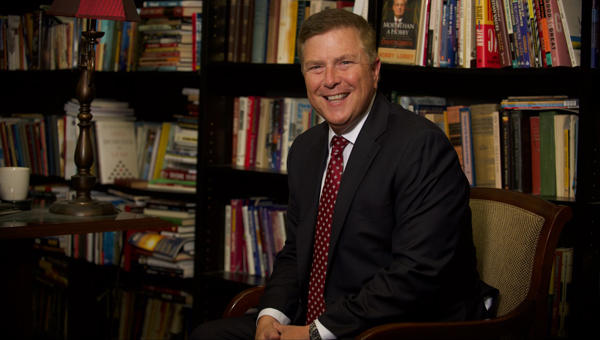 Evangelist Scott Dawson has announced his intention to run for governor of Alabama. (CONTRIBUTED)

HOOVER – Recognized evangelist Scott Dawson, a Shelby County resident, will run for governor of Alabama in 2018.

Dawson founded the Scott Dawson Evangelistic Association, which is based in Birmingham and has produced large event ministries as well as student conferences.

The campaign was announced on “The Rick and Bubba Show,” which is co-hosted by friend and supporter Rick Burgess.

Dawson said when he assessed the state of politics in Alabama, “My heart was broken. We’ve got to do better.”

Dawson and some like-minded individuals sought someone to support, but the others encouraged Dawson to seek the office.

“I prayed through it, and everywhere I turned was affirmation,” he said.

Dawson said he thinks he can succeed in the position despite a lack of experience in public service.

“My response to that is, the Ark was built by amateurs and the Titanic was built by professionals,” he said. “I’m not running against any other person; I’m running against a system. Sometimes you need a brand new set of eyes, someone with a fresh perspective. I feel like it’s been a lifelong preparation to lead our state.”

Dawson said he thinks Alabama is “one of the greatest secrets of our country.”

“We live in a great state, and it’s time for us to talk about something in addition to our college football,” he said. “My whole concept right now is Alabama is at a turning point.”

Dawson said his platform will take shape as he embarks on a “listening tour” across the state.

“I’m listening to the people of Alabama,” he said. “It’s going to take all of us working together. Everybody talks about jobs, education and industry. We can have that as our platform, or we can dig down deeper. You’ve got to get down deeper than just the superficial campaign slogans.”

Dawson said his motivation is doing what is right.

“I am a convicted leader—not worried about polls or politics,” he said. “Those convictions will never be compromised.”

Dawson said that, if elected, he would work to benefit all Alabamians regardless of political affiliation, religious beliefs or any other demographic.

“Our Founding Fathers created a country where there’s room for everyone—all faiths can pursue liberty,” Dawson said. “I think through everything with a biblical worldview. I’m not going to wear it on my sleeve, but I have it in my heart.

“For 30 years, my life has consisted of breathing hope into the generation that’s behind us and mobilizing ministers—bringing them together, getting past what we don’t agree on and focusing on what we can agree on. If we can do that in Alabama, when the water rises, all the ships go up.”

Gov. Kay Ivey, who took office in April after the resignation of Robert Bentley, will be eligible to seek a full term but has not announced her candidacy.