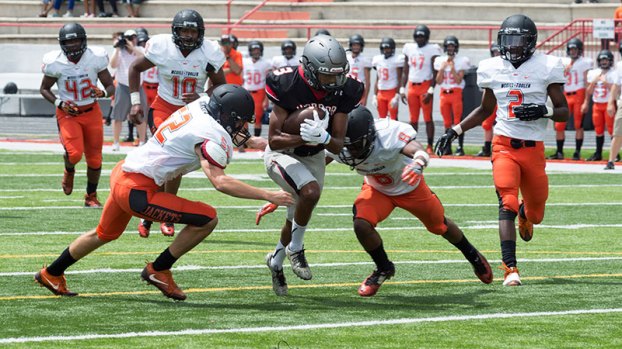 Thompson High School’s football team will start the 2017 season against a Georgia charter school before getting into the meat of its Alabama Class 7A schedule. (Reporter Photo/Neal Wagner)

ALABASTER – The Thompson High School football team will kick off the 2017 season by hosting one of the top Class 2A teams from Georgia before moving into its Alabama Class 7A gauntlet, according to the school’s recently finalized fall schedule.

The Warriors will start its regular season on Friday, Aug. 25, by hosting Atlanta’s Hapeville Charter School at Larry Simmons Stadium. Hapeville Charter has an enrollment of about 680, and advanced to Georgia’s Class 2A semifinals last year en route to a 10-4 overall record and 6-0 region record.

After hosting Hapeville Charter, the Warriors will have a bye week on Sept. 1 before hosting Tuscaloosa County on Sept. 8 and Mountain Brook on Sept. 15. Thompson’s first road test will come at Oak Mountain on Sept. 22 before the Warriors return home to face rival Pelham on Sept. 29.

THS will travel to Vestavia Hills and Spain Park in back-to-back games on Oct. 6 and Oct. 13 before returning home to host Huffman on Oct. 20. The Warriors will round out the season by traveling to Hoover on Oct. 27 and traveling to Hillcrest Tuscaloosa for a Thursday night game on Nov. 2.

The following is Thompson’s full 2017 schedule (Region games noted with an asterisk):

-Oct. 6 away at Vestavia Hills*

-Nov. 2 (Thursday) away at Hillcrest Tuscaloosa