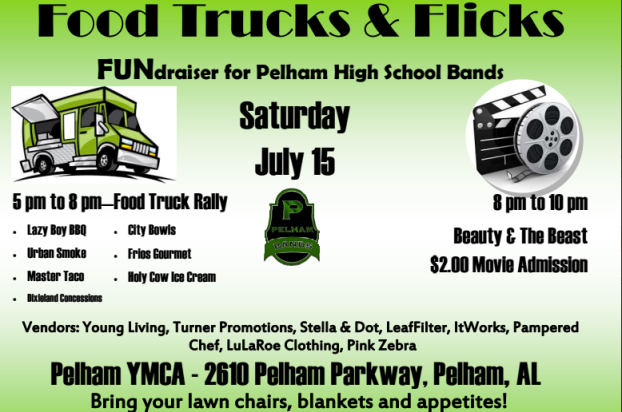 PHS Band Boosters is hosting a food truck rally and movie night fundraiser for the band on Saturday, July 15, at the Pelham YMCA. (Contributed)

The fundraiser will take place at the Pelham YMCA, 2610 Pelham Parkway. Attendees are advised to bring their own blankets and lawn chairs.

In addition to raising money for the band, Monday said the event also serves as a fun family outing and as an opportunity for the community to come together.

The proceeds from the event will go toward helping the band raise $15,000 to $20,000 to purchase a semi-trailer to transport instruments and equipment. Monday said trailer would also serve as a storage facility for band equipment.

“This is the first year that we’re going to devote money to this particular fund so it’s going to take us a few years to save up the money,” Monday said.

Other PHS band fundraisers include selling advertisements for the school’s football program. Monday said the fundraiser is in partnership with the PHS football team.

“We both sell ads and then the football programs are sold at the games,” Monday said.

Prices differ based on the size of the ad. Members of the community can also sponsor the band. Sponsors are announced at halftime during football games or their name is listed on a banner at the band’s concession stand. Monday said the different ways sponsors are recognized depends on the level of sponsorship.

PELHAM – A Pelham man was recently released from Shelby County Jail after being charged with several counts of receiving... read more