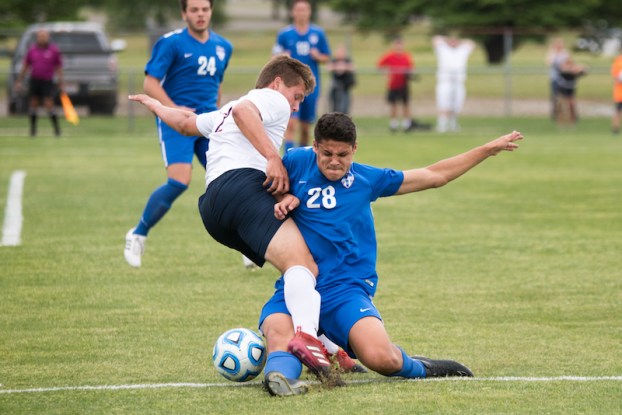 Oak Mountain’s Jackson Murphy battles through the defender in the semifinals of the Final Four. He had two goals in the game and went on to be named finals MVP. (File)

Those three championship teams included Oak Mountain, who picked up their third in a row and seventh in 12 years, Pelham, who picked up their first after falling the past two seasons, and Indian Springs, who dominated the entire season and grabbed their second title in four years. While those teams finished on top, they weren’t the only three teams to have incredible seasons as seven teams were ranked in their respective top 10 for the majority of the season and at one point all No. 1 positions were occupied by county teams.

None of that would have been possible without some of the greatest soccer players not just in the county nor the state, but the country. Every team had their team leaders, of course, but the depth by which each of these teams competed was unlike anything we’ve ever seen and it’s displayed on this year’s All-County boys soccer team.

Forward: Jackson Murphy, Oak Mountain, junior. The junior really came on strong late, especially in the Final Four to help lead his team to a state championship. He had two goals in the semifinals against Vestavia and followed that up with an early goal in the state championship as well to bring his Final Four total to three, which earned him the Finals MVP. He put up 15 goals and 10 assists this season and will be a strong leader on next year’s squad.

Forward: Brooks Rice, Spain Park, junior. Rice, who hopes to become a coach one day, spent the 2017 season looking like a professional soccer player instead. He and Liam Condone were the easy leaders on this year’s team, but Rice’s 41 goals led the county with ease and is one of the greatest seasons in the state’s history ranking him 11th according to the AHSAA record book. He also added five assists and will be back on next year’s team looking to lead his team to a state championship.

Forward: Logan Frost, Briarwood, sophomore. Only playing in 20 of the Lions’ 26 games, Frost still somehow managed to finish with the third highest goal-total in the county with 25 goals. He also added 17 assists, which was second on the team and finished the season as the team’s MVP as just a sophomore. He is one of several young members on this Briarwood team that will be back looking for redemption after falling in the state championship game.

Forward: Lando Nichols, Chelsea, sophomore. It wasn’t the strong season that Chelsea hoped for record wise, but several players still had great performances for the Hornets, including Nichols. In his second year starting, he picked up 16 goals and 12 assists.

Midfield: Kennedy Davis, Oak Mountain, senior. Davis was recently named as the boys soccer Gatorade Player of the Year in Alabama and is one of just two members of this year’s Oak Mountain team that has been on all three of the Eagles’ championship teams during the three-peat run. He finished the season with 22 goals and 12 assists playing one of the toughest soccer schedules in the county.

Midfield: Clay Holstad, Oak Mountain, junior. The captain of the team after being a starter for the last three seasons alongside Davis making him the second to complete the three-peat. He was the Finals MVP of the 2016 state championship and while his 10 goals tied for third on the team with two others, his 21 assists led the team showing his great vision on the field.

Midfield: Michael Milliron, Calera, junior. Milliron was not only the leading scorer on this year’s Calera team, but also had the second highest total in the county with 27 goals. He gave the Eagles a physical presence on the field with great ball handling skills. He added 10 assists to give him 37 total points on the season, which was one of the highest totals in the county.

Midfield: Jack Wilson, Westminster, senior. Westminster was one of the county’s best teams all season long, but fell in a 1-0 heartbreaker to Bayside Academy to end their season short of a state championship. Wilson’s performance this season, however, was jaw-dropping. His 24 goals were impressive enough, but the 33 assists he threw on top of that for 57 points to lead the county was utterly amazing. He will be sorely missed by the Knights in 2018.

Defender: Armando Valencia, Pelham, senior. Valencia was one of the heroes of this year’s break-through state championship team after he put the Panther’s first goal on the board in the title game from just beyond midfield. He was one of the strongest defenders in the county and helped post 10 shutouts while also adding three goals and one assist. He helped the team shutout both Daphne and Cullman in the Final Four.

Defender: Liam Condone, Spain Park, senior. His eight goals and three assists aren’t the most ground-breaking stats in the county, but his leadership and defensive skills were among the best in the county. He played all over the field as their best player because he was such a difference maker at every position.

Defender: Nick Craddock, Chelsea, senior. As a three-year starter for the Hornets, Craddock has grown into a strong leader and defensive player. He was the captain during his final season at Chelsea and led the team with 23 interceptions.

Defender: Gavin Owens, Thompson, senior. He was named as the team’s MVP this season after finishing with two goals and seven assists. He was an integral part of their defense that picked up six shutouts in a row to take the Island Cup early in the season and shutout three of their final five opponents, all while playing in one of the toughest areas and schedules.

Defender: Patrick McGuire, Indian Springs, junior. Indian Springs didn’t give up more than two goals this year and only gave up more than one twice while posting 15 shutouts on their way to the 2017 state championship. A big reason why was the defense of McGuire who was a staple as one of the backs this season making life much easier for goaltender Zak Heino.

Goalkeeper: Seth Torman, Pelham, senior. Zak Heino, Indian Springs, senior.  Not many words can describe how great of a player Torman has been for the Panthers in his career. He led them to three straight state Final Four appearances before finally busting through to win it all in his senior season to send him out on top. His stats do all the talking after he posted a goals against average of .579 with 134 saves and 11 shutouts. He posted shutouts in four of their five playoff games including both Final Four games.

Heino, on the other hand, was almost equally as impressive for Indian Springs. He didn’t give up more than two goals the entire season and gave up more than one just twice. He posted 15 shutouts and allowed just one goal in each of their two Final Four games. At one point in the season he posted a shutout in nine of 10 games.

Forward: Eli Alexander, Chelsea, senior. The UAH signee had 19 goals and five assists during his final season with the Hornets and was named as a member of the All-Metro first team for his efforts.

Forward: Jose Jimenez, Pelham, senior. He had 13 goals and two assists as a member of one of the strongest senior classes that Pelham has ever seen and will ever see after making three straight Final Four appearances.

Forward: Hamilton Bowen, Briarwood, sophomore. Another one of the young phenomes at Briarwood, Bowen posted 18 goals and three assists for the Final Four team.

Forward: Cameron Sumpter, Spain Park, junior. He was another strong player on this year’s team that got the unfortunate pleasure of facing Vestavia in the first round of the playoffs. Sumpter picked up 12 goals, which was second on the team, as well as six assists, which tied for first on the team. He will be the senior leader on next year’s team.

Midfield: Irvin Rodriguez, Pelham, sophomore. This kid is unbelievable to watch in person. He touches the ball on almost every Pelham offensive possession and was the team’s offensive MVP after totaling 15 goals and 13 assists. As just a sophomore he has future first team potential.

Midfield: Yunior Tejada, Pelham, senior. He tied for second with Jimenez totaling 13 goals this season and also added four assists. He is one of seven seniors that have been able to go out on top after reaching three straight Final Fours.

Midfield: Nic Juarez, Calera, senior. The Eagles’ team captain finished second on the team with 22 goals, but his 15 assists tied him with Milliron for the point total of 37. He played several different positions thoughout the year doing whatever he needed to help the team.

Midfield: Griffin Felton, Briarwood, junior. With 13 goals and a team-high 19 assists, he was more than worthy of being named to this team. He will be looked at as a senior leader on next year’s squad as the Lions return their top five playmakers.

Midfield: Chad Jeter, Oak Mountain, senior. Kenneth Rodriguez, Thompson, junior. Both guys were too deserving to pass up in an extra midfield spot. Jeter was Oak Mountain’s third player to finish with 10 goals and also tied for second with Davis by adding 12 assists. Rodriguez picked up 10 goals and nine assists for the Warriors, which was second on the team in both categories. He has also been selected to the Alabama North/South All-Star Game.

Defender: Douglas Herrera, Pelham, senior. Herrera only picked up two goals this season, but played an important part on the best defense in the county.

Defender: Bryant Wood, Briarwood, junior. He picked up two goals and six assists as a junior and was named as an honorable mention member of the All-Metro team. He along with the other four returnees will make the Lions a favorite in 2018.

Defender: Ethan Acton, Oak Mountain, junior. The fifth Eagle player to make the team, which is what happens when you are as good as they were. He only picked up two goals and one assist, but was active all over the field and by far the team’s strongest defender.

Goalkeeper: Nick Adams, Thompson, senior. Both of these guys were unbelievable during their senior seasons. In 19 starts, Adams picked up 117 saves and allowed just 15 goals the entire season while posting seven shutouts. He led the Warriors to an Island Cup victory with a shutout in each game and also posted shutouts in three of their final five games.

Girls have 7 in final soccer poll

By ALEC ETHEREDGE | Sports Editor Girls soccer in Shelby County during the spring of 2017 reached a new level.... read more