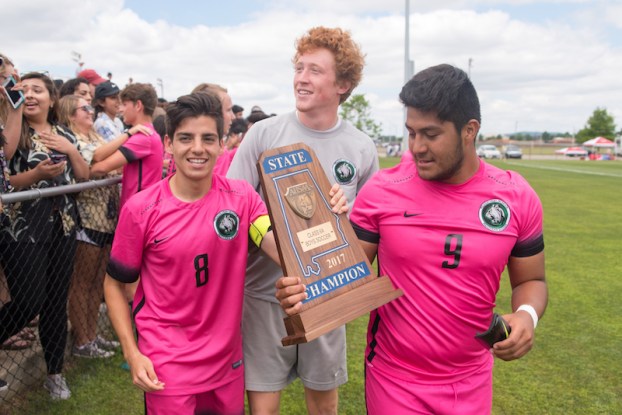 Seth Torman Celebrates after winning the 2017 soccer state championship with Pelham after falling in the semifinals the previous two seasons. (File)

Heino and Torman named boys soccer Players of the Year

Picking a Player of the Year when it comes to soccer in Shelby County is the equivalent to picking the state’s best player and a decision that isn’t taken light heartedly. In 2017 four boys soccer teams in the county made it to the state championship in all four of the state’s classifications. Of those four, three won state championships in Oak Mountain, Pelham and Indian Springs, while Briarwood lost a heartbreaker.

That strong level of play was thanks to some of the greatest soccer players across the state and having to choose from that pool of talent who is the best can be tough considering they are all deserving.

Oak Mountain’s Kennedy Davis was named the 2017 Alabama Gatorade Boys Soccer Player of the Year, which puts him up for one of the top national awards in the country. This was all due to him leading the Eagles to their third straight state championship after being an integral member of all three teams. He did so by picking up 22 goals and 12 assists during his senior season, including the game-winning PK in the state championship game.

While Spain Park didn’t make it out of the first round of the playoffs, Brooks Rice did everything he could to give them a chance this entire season. Rice obliterated the rest of the field with a county-high goal total of 41 this season, while also adding five assists. Competing in a tough area that features Oak Mountain and Mountain Brook makes life tough for all of those teams, but makes it even more impressive that someone can be responsible for 41 goals and 46 points against the state’s best teams.

Another one that caught many eyes this season was Logan Frost, who as just a sophomore for the Briarwood Lions was able to score 25 goals and add 17 assists after playing in just 20 of their 26 games. He was one of five non-seniors and three underclassmen that helped lead the Lions to a state championship appearance making him a player to keep an eye on the next two years.

While all of those athletes were unbelievable for their respective teams, two guys jumped off the pages for what they were able to do and both were key goaltenders for state championship teams in Pelham’s Seth Torman and Indian Springs’ Zak Heino. 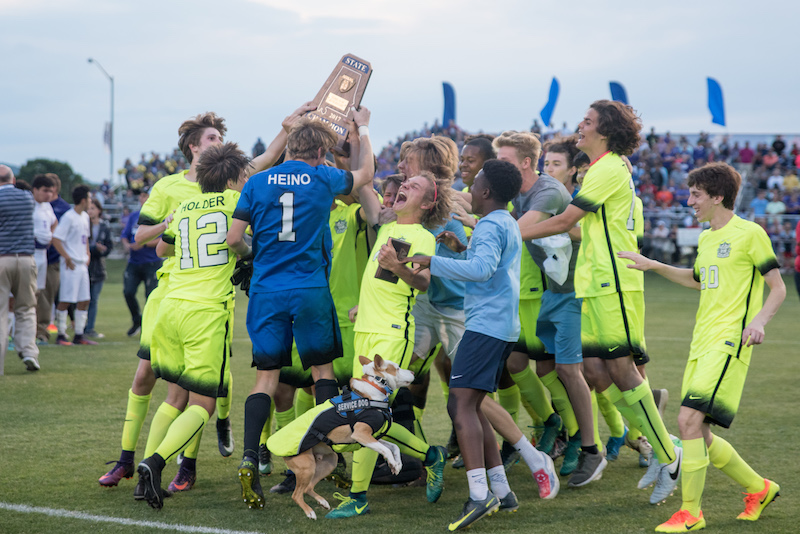 Indian Springs’ Zak Heino, No. 1, celebrates with his teammates after grabbing the 2017 state championship trophy. (File)

Torman, who was already on the radar coming into the season after leading the Panthers to back-to-back Final Four appearances, really skyrocketed up the list over the final 13 games, giving up more than one goal just once on their run to the state championship in his third and final season.

After coming up short the previous two seasons, falling in the semifinals, Torman flipped a switch during his senior campaign and was determined to send himself as well as his fellow seniors out on top. He did so by posting 11 shutouts and making 134 saves, some of which were jaw-dropping that he could even get to them.

He and the Panthers faced off against some of the best teams from around the state as they played one of the toughest schedules, which made his goals against average of .579 extremely impressive. In the playoffs Torman posted two shutouts in the first two rounds before picking up a 2-1 win over No. 2 Homewood at the time to advance to the Final Four.

In the Final Four, Torman added two more shutouts as he was determined to win the state championship. Pelham took down Daphne 1-0 in round one and defending 6A champion Cullman 2-0 in the championship match to make all the hard work pay off for the senior that has been through so much. It was a sweet ending to a high school career for one of the county’s best goalkeepers.

What Heino did during his team’s run to the state championship was equally as impressive, mainly due to the bulk of work he did for his team during his final season.

Starting with game one, he made his presence known and showed future opponents it was going to be tough to beat the experienced keeper. That first game, Heino was able to hold eventual 5A state final team Briarwood to one goal as Springs picked up an impressive 2-1 win to start the season.

He went on to give up one goal in 14 different games, two goals in two games and added 15 shutouts. Heino never gave up more than two goals as he was the key puzzle piece to a team that only lost two games finishing with an overall record of 23-2-6 on their way to the state championship.

During their playoff run, Heino started with two straight shutouts before allowing one goal apiece in both Final Four matches as Springs took down Bayside Academy 3-1 in the semifinals and Susan Moore 2-1 in the state championship. His average of giving up .580 goals per game was one of the more impressive feats in the state this season and while many may say he played in a lower 1A/3A classification, he led his team to wins over Briarwood twice as well as other top teams from around the state.

While several players were deserving of the award, especially offensively, you can���t win a state championship without a great goalkeeper. Both of these guys not only stepped up their level of play to try and bring home the title during their senior seasons, but their leadership and vocal skills really showed off throughout the year as they were determined to go out on top.

By ALEC ETHEREDGE | Sports Editor PELHAM – Joy was gleaming all over the face of Pelham boys’ soccer coach... read more