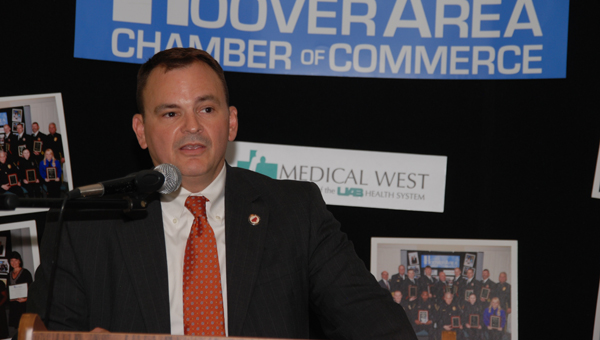 “What we found is we had become silent,” Miller said. “We weren’t really communicating with each other.”

Miller, a graduate of Tulane University and the University of Alabama School of Law who has lived in Chelsea since he joined the district attorney’s office in 2003, said the motivation behind Compact 2020 was a spike in overdose deaths related to the ongoing opioid epidemic.

Overdose deaths in the county have fallen from 57 in 2015—which was fifth most in Alabama—to 36 in 2016 and 10 so far in 2017, but Miller said the decrease is likely due to the availability of Narcan, which can treat narcotic overdoses.

“I’m afraid we’re just seeing the tip of the iceberg,” Miller said. “There are people getting [Narcan] day after day.”

Though investigations of youths may make people uneasy, Miller said the approach is necessary to combat drug use and is not focused on punishment.

“This is about getting these people help,” he said.

Opioids are not the only drugs that cause problems, Miller said.

Miller said the marijuana industry has made headway.

“We need to be concerned about that,” he said. “Our children are under the impression that’s a safe drug for them to use because that’s the culture we live in.”

And constant connectivity through social media and other technology causes stress that people seek to relieve through use of Xanax and other prescription medications, Miller said.

“They are constantly on stage pretending to be someone that they’re not,” Miller said.

“We’re pushing this to kids because we’re convinced they have seen the death and destruction and want to be part of the solution,” Miller said.

The luncheon was sponsored by Medical West, an affiliate of UAB Hospital, and was held at the Hoover Country Club.