Galloway became a double amputee during his second tour in Iraq from an IED explosion in December 2005. He spoke to the full house of the life-changing event and the trials of his recovery. 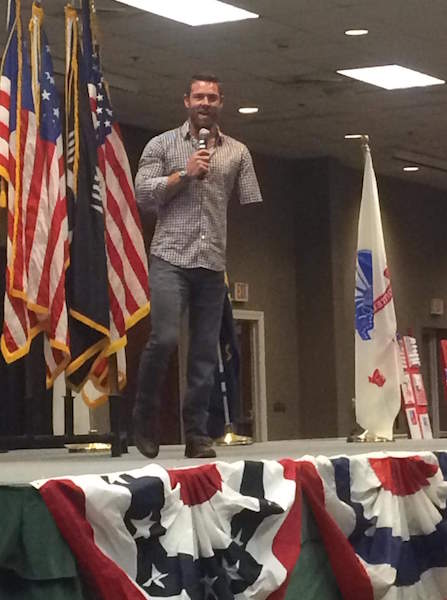 Motivated by his deep love of his three children, he fought depression to accept and overcome his disabilities. He became a household name after finishing third with partner Sharna Burgess on Dancing with the Stars in 2015 and winning the 2014 Men’s Health Ultimate Guy.

He has written a new book, “Living with No Excuses,” which he autographed at the event. The books sold out and he stayed after the ceremony to continue to sign autographs and pose for pictures.

Galloway spoke on the importance of the U.S. flag to him. After conversing with his son, he summed up his love of the flag by saying, “The flag represents us; the flag is us.”

Sharon Gaydon and Liz Bishop were co-chairs of the event, and Barbara Shinpaugh is president of Cahaba Elks. Homeland and Rob Robinson entertained with patriotic music. The history of the U.S. flag was portrayed from Revolutionary War to 50-star U.S. Flag. Veterans in the audience stood while their military flag was displayed with each military branch song. Ashley Gann, CBS 42 meteorologist, was emcee.

Pelham Fire Department displayed its huge U.S. flag at the entrance of the civic center hung from fire trucks. The Pelham Honor Guard presented the colors, and Robinson sang the National Anthem.

“Our children, friends and neighbors will only learn to revere, love and pay tribute to our flag if we give them something to emulate. It’s up to us,” said Waters.