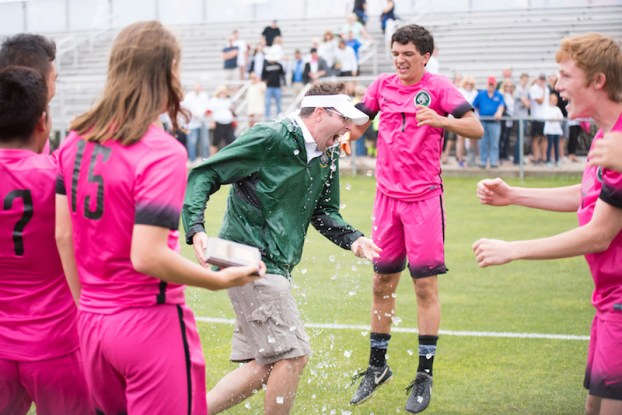 Pelham head coach Patrick McDonald celebrates with his team after winning the 2017 state championship for the first time in school history. It really describes the feeling he and his team had after the victory. (File)

PELHAM – Joy was gleaming all over the face of Pelham boys’ soccer coach Patrick McDonald on Saturday, May 13, as his team picked up the school’s first ever state championship in the sport.

It wasn’t just that they won the first, but that the school was able to overcome heartbreak of the two previous years to send the seven members of an inspiring and historic senior class out on top.

This group of seven seniors were part of back-to-back Final Fours in 2015 and 2016, but they came up short of the ultimate goal of a state championship by falling in the semifinal game each year.

In 2017 they came into the season with one thing on their mind, making the third time the charm and going out on top. They did just that by going 17-6-1 during the regular season and 5-0 in the postseason including some impressive performances. The historic season, that clearly was sentimental, was good enough to earn coach McDonald the well-deserved award of 2017 Shelby County boys soccer Coach of the Year.

“We’ve had nine starters with three years of experience up here and it just finally paid off,” McDonald said. “They have rolled with the punches and adapted to different playing styles based off our opponents.”

There were several worthy candidates for this year’s top honor such as Oak Mountain head coach Dan DeMasters, who won his third straight state championship since taking over four years ago; Briarwood’s Shane Brower, who took a team consisting of very few seniors and several underclassmen to the state championship; and Indian Springs’ Rik Tozzi, who led the team to its second championship in four years.

Leading Pelham to its first ever state championship and helping deliver a championship to this year’s senior class just made McDonald stick out from the rest of the pack.

“It was a testament to these kids and everything they’ve gone through,” McDonald said after winning the championship. “That’s what it’s about. You work all year on this and to see what this season brought made it so worth it. They’ll always have this memory and have worked really hard so I’m just really proud of them.”

It became evident that the Panthers wanted it more this year on their redemption path as they topped John Carroll, Northridge and Homewood to reach the Final Four, allowing just one goal in those three games.

Once they got to the Final Four in Huntsville, the Panthers turned up the pressure a notch higher shutting out Daphne and Cullman on the way to the championship, which was a testament to their defense and goaltender Seth Torman.

McDonald eluded several times throughout the season and over the week of the Final Four that to be the best you have to beat the best. His team’s experience over the previous two seasons in the Final Four was clearly helpful and taking down defending 6A champion Cullman was the icing on top of an already extra sweet cake.

One thing is evident, McDonald will never forget what he went through with this particular group of seniors and the seniors that poured their heart and souls into this team will never forget how their head coach helped deliver them a state championship.