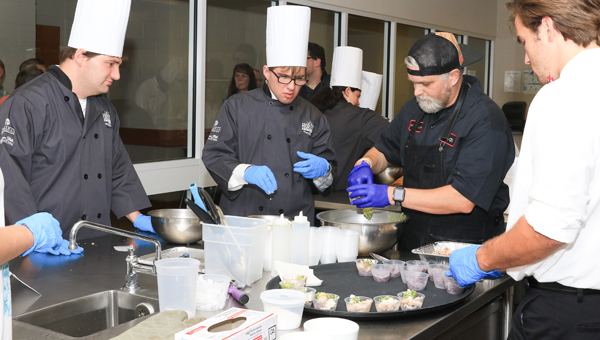 The Healthy Hearts for Horizons Culinary Extravaganza was held from 5-9 p.m. on Friday, June 16, at Jeff State’s Shelby-Hoover Campus off Valleydale Road, with about 200 people attending and about $60,000 raised, said Libby Holmes with Jeff State’s Office of Community Outreach.

A meal and wine was catered for attendees by Taziki’s, and beer was provided by Supreme Beverage.

“Once students age out of high school, there’s really nothing for them as far as public school goes,” Holmes said.

Students at Horizons School have been learning to shop for, prepare and cook healthy meals for themselves, families and friends.

The fundraiser included a competition among six teams of students.

They competed for prizes from guests attending the reception as well as from celebrity judges.

The event was hosted by Jeff State’s Culinary and Hospitality Institute. A reception was held from 5-7 p.m., with the dinner, cooking demonstration and live auction from 7-9 p.m.

The live auction featured items such as a safari for two to West Africa, Dominican cigars, one large growler of beer a month for 12 months from Hop City, glass artwork and a 65-inch television.

Guests watched students prepare appetizers for the reception through the glass-enclosed windows around the kitchens, and Jeff State Culinary student chefs assisted the student teams.

Recipes were donated by celebrity chefs around Birmingham, and simplified by Taziki’s Founder Keith Richards.

Richards, who has been named among Jefferson State Community College’s Outstanding Alumni, provided restaurant staff members as well as food for the event, Holmes said.

Contributing to the donated recipes was Joseph Mitchell, director of the Jeff State Culinary and Hospitality Institute.

Holmes said Horizons School contacted Jeff State because of the Culinary and Hospitality Institute. College officials then helped plan the event and have looked for more opportunities to partner with Horizons.

An example is Jeff State honors students acting as mentors for Horizons students who are enrolling at the college.

“Our students will be waiting for them as they arrive, will buddy with them and go to class with them and help with their transportation back to Horizons,” Holmes said.

ALABASTER- Members of the Thompson High School Sister Schools team, along with several teachers from around the state, recently returned... read more