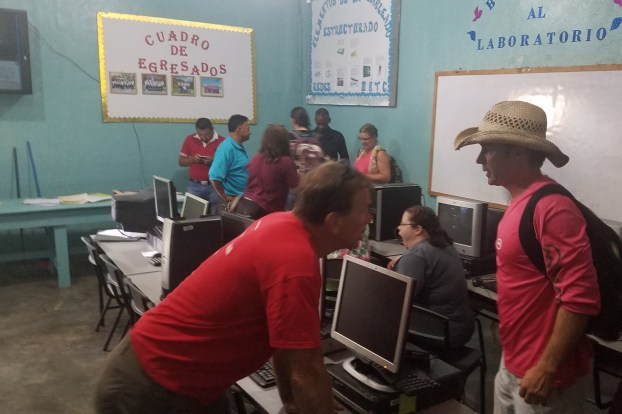 ALABASTER- Members of the Thompson High School Sister Schools team, along with several teachers from around the state, recently returned from a weeklong trip to Honduras on Sunday, June 18.

During the trip, the Sister Schools team assessed the educational and technological needs of multiple schools in Honduras and set up internet and Google Hangout to allow Honduran teachers to communicate with teachers around the world.

“The trip’s primary focus was to connect our teachers with teachers in Honduras,” THS engineering teacher Brian Copes said.

For students in both countries, Copes said the ability to connect will serve as a useful teaching tool.

“One of the things we discovered was that the students [in Honduras] are supposed to be taught the English language. However, we found that few of the teachers spoke English. When our students are learning their ABC’s and 123’s over here, they can look in on us,” Copes said. “Likewise, the kids over here are going to want to communicate to the kids over there, do the teachers over there can teach our kids Spanish.”

Rising THS senior Jessie Hardin said the team faced some challenges with the local government, but were able to overcome them.

“In Honduras, it’s corrupt. People run off of drug money,” Hardin said. “To be able to put in computers, you have to get the mayor’s approval. During the last trip in Honduras, we installed internet and he took it out as soon as we left because we didn’t go through him first.”

As a side project, Hardin and THS rising senior Bri Dewilde donated 50 pounds worth of childrens’ vitamins, bandage wrap, over-the-counter medications to Clinic of the Angels in Honduras.

“They get an annual shipment of medicine and the wrong date was put on it this year,” Dewilde said. “They had been out of medicine that they need, so they were really excited.”

According to Copes, the Sister Schools team was accompanied by teachers from Alabaster, Troy, Eufaula, Satsuma and a professor from Indiana University – Purdue University Indianapolis on this trip.

Hardin and Dewilde, who both aspire to be doctors, said the poverty that they witnessed while in Honduras was eye-opening.

“It was inspiring to see such a different culture,” Dewilde said.

“They might live in houses made out of mud, but they’re happy,” Hardin added. “It would be different over here.”

Next summer, Copes said he plans to return to Honduras with more students and teachers from around the state of Alabama. During next year’s trip, Copes said he is planning for volunteers to convert old semi-truck trailers into portable classrooms that can double as hurricane shelters.

“I’m excited to see how these students are interested in changing the educational system in Honduras,” Copes said.