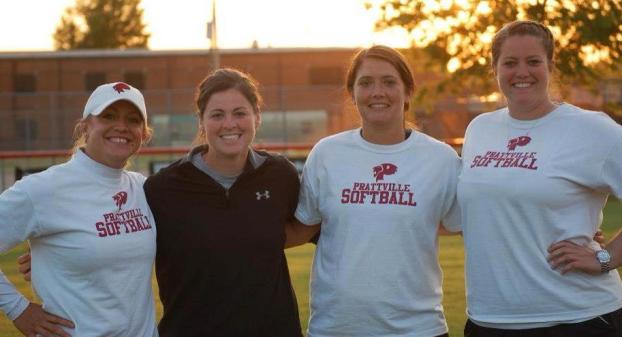 Former Prattville coach Rachael McClure, middle left, will be the new Pelham softball coach as she joins forces with former coaching-mate Sabrina Tutchtone, who has stepped down as head coach to become an assistant. (Contributed)

PELHAM – Rachael McClure has spent all 11 of her coaching years and 10 of her teaching years as part of the Prattville High School program, but that’s about to change as McClure is making the first move of her career.

“I’m really excited for this opportunity,” McClure said. “The fact that they considered me to come up here and take over the program was so special to me.”

That move will be to the city of Pelham as she takes over the Pelham High School softball team where she will be reunited with mentor and former Panther head coach Sabrina Tutchtone.

Tutchtone, who has plans to further her education and also teaches AP U.S. History, has been planning to step down as head coach due to the heavy work load. The move will create a reunion of sorts as Tutchtone also came from Prattville five years ago. While there, she and McClure, who was an assistant, became very close with one another.

McClure was named the head coach once Tutchtone took over the Pelham job and has been with the Lions for the past five years.

“It’s exciting because we had a lot of good times in Prattville,” McClure said. “We always put our heads together and came up with solid ideas and now that we will be on the same team again, it will be fun to try and create that success here.”

Over the last three seasons at Prattville, McClure amassed a record of 99-41, including a 33-15 record in 2017, which led to an appearance in the state tournament. While she’s coming into a tough area that features Chelsea and Helena, both of whom have been in the state tournament the last two years including one state championship from Chelsea, McClure feels good about what she and Tutchtone can do together.

“We’re comfortable with each other and I think that will be a big thing with the girls as well,” McClure said. “Having a new coach coming in, but having that comfort level where your other coaches are still here too, they shouldn’t be too nervous or hesitant.”

The relationship between the two, is more than just coach and coach, but has led to a friendship as well.

“We would always hangout together outside of coaching,” McClure said. “I remember one time when it snowed and we were out of school for the day, we had a Dance Dance Revolution party with a couple of the other coaches. We just have a great friendship that transitions well into the coaching world.

When hearing of McClure’s opportunity to come coach the team, Tutchtone immediately told athletic director Kim Kiel she would be willing to step down if they could get her former assistant to become the head coach. Now that it has come to fruition, Tutchtone has not only had a lot of the workload taken off of her like she had hoped, but also gets to stay with the team creating a “dream situation.”

It’s not just Tutchtone that is excited to have McClure in Pelham, but residents have already started reaching out to her as well.

“People have been very welcoming and hospitable even though I haven’t met most of them,” she said. “I’m even more excited to see how the support for the program grows with so many people already being excited.”

This is something that athletic director Kim Kiel already knew and was one of the reasons she has been interested in getting her to become a Panther for a while now.

“It means a lot that people are already standing behind her,” Kiel said. “Our community and school is instrumental in supporting our program and taking the next step with her at the helm.

“I feel like this is a really great hire for Pelham. Rachael has such a strong work ethic with impeccable character, which is something that is so important to me as an athletic director because the people I hire will be influencing our young people.”

Reaching the young people might be what has Kiel most excited and something McClure really wants to focus on.

“I want to get down in the youth leagues and get more involved in that,” she said. “The hope is to draw a lot more young girls who might want to play. We want to make it more popular across the area and get more girls interested in not just joining us at the high school level, but all levels.”

While she has only lived in one place since becoming a coach, Prattville, she knows her girls there will be fine and continue to do great things, but she is excited to take that next step with the Pelham program.

It’s almost an uncertainty factor that has McClure so excited for her new team, but one bit of déjà vu will help make the transition smooth as she and Tutchtone join forces again to try and conquer one of the toughest areas in Alabama high school softball.

Wiley to compete in U19 World Cup

By ALEC ETHEREDGE | Sports Editor Competing on the national stage is becoming somewhat of the norm for former Spain... read more