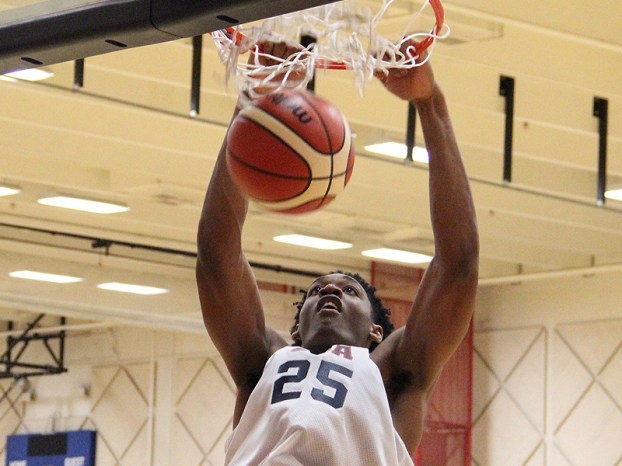 Former Spain Park standout and current Auburn center Austin Wiley has been named to the 2017 U19 World Cup team. (File)

Wiley to compete in U19 World Cup

Competing on the national stage is becoming somewhat of the norm for former Spain Park standout and rising sophomore at Auburn Austin Wiley. It was announced on Thursday, June 22, that Wiley would compete in the USA’s U19 basketball team as he looks to earn another gold medal.

Wiley, who was named as one of the 12 members of the team, will compete for the gold medal in Cairo, Egypt July 1-9. It marks the second time he will compete in such an event in as many summers after leading the USA FIBA men’s U17 to a World Championship in Zaragoza, Spain. During that run last summer, Wiley averaged eight points and 6.4 rebounds, which was second on the team, as he picked up his first gold medal. He also attended the 2015 U16 National Team training camp and has participated in the past three October minicamps.

Coming out of Spain Park, Wiley moved to a prep school for the fall of 2016 before joining Auburn early in 2017, something that is rare in college basketball. With the Jags, Wiley averaged 22 points and 12 rebounds as a junior and also helped them get to the 7A state championship game. He was a three-time all-state selection after starting his freshman-junior years with Spain Park.

The team will remain in Colorado Springs and will train twice a day through Sunday before departing for Egypt. Wiley is one of two centers on the roster and while there are several forward’s, his 6-foot-9 height is second on the team, which should assure him good minutes on the court.

Wiley averaged 8.8 points, 4.7 rebounds and 1.4 blocks in 18.1 minutes this past season while starting 21 of 22 games. The Hoover native, who shot 58.0 percent from the floor, scored a career-high 25 points, including 21 in the second half, at NIT Champion TCU on Jan. 28. He recorded his first double-double in only his 11th game as he had 10 points and a career-best 11 rebounds at No. 23 South Carolina, which reached the Final Four.

He was named SEC Freshman of the Week on Jan. 23 after averaging 14.5 points and 7.5 rebounds in wins vs. Alabama and LSU.

Selections were made by the USA Basketball Men’s Junior National Team Committee as athletes eligible must be 19 years or younger (born on or after Jan. 1, 1998) and U.S. citizens.

Heino and Torman named boys soccer Players of the Year

By ALEC ETHEREDGE | Sports Editor Picking a Player of the Year when it comes to soccer in Shelby County... read more