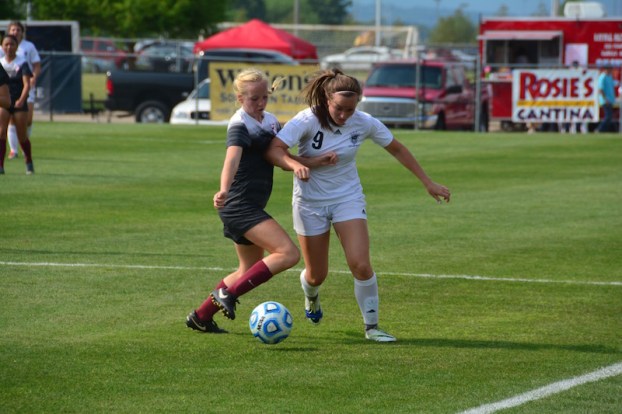 Briarwood’s Sarah Adcock picked up a county-high 54 goals during the 2017 season, 29 more goals than last year’s county high of 25, which led to her being named the 2017 Player of the Year. (File)

Adcock named 2017 Player of the Year

NORTH SHELBY – Spotting a difference maker on the soccer field can be somewhat of an easy task. Normally it doesn’t take long for that player to get the ball and break away up the field leaving defenses jaws dropped and minds confused on what just happened.

That’s exactly what Briarwood’s Sarah Adcock was able to do for the Briarwood Lions during the 2017 season after having one of the best soccer performances in the school’s history as the senior scored or assisted on 64 of the Lions’ 101 goals.

It didn’t matter if it was the first game of the season, the seventh or the last, Adcock made her presence felt the entire year and was a run-away winner of the 2017 Shelby County Player of the Year award after posting 54 goals and 10 assists during her senior campaign.

The first time I witnessed her distinguishing soccer skills was on Feb. 28 in their fifth game of the season against 7A No. 7 Spain Park. Early in the game, Adcock made her presence known slipping passed the defense on multiple occasions, but she never was able to sneak a ball into the back of the net. 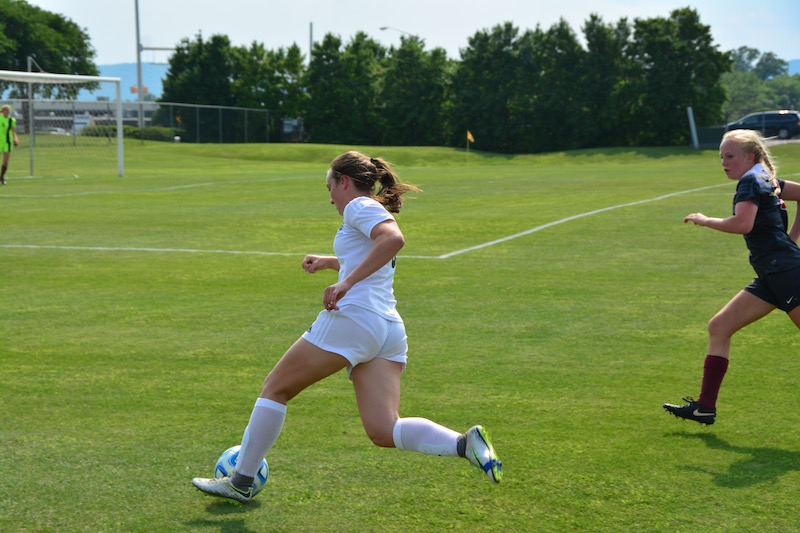 Adcock uses her speed to beat the defender in the semifinals of the playoffs where she posted four goals. (File)

Finally, 11 minutes into the game, she picked up another chance off a Jaguar turnover and sprinted at an incredible pace up the field to put in the game’s first goal. Despite Spain Park going on to win 4-3, Adcock added two more goals for a hat trick performance, all of which came in similar fashion as she just simply beat the defender.

“She just knows how to sneak behind defenses and find the ball, she’s relentless,” head coach Ryan Leib said of the senior’s evasiveness.

She continued this level of play all season and posted several hat tricks throughout the year all the way up to the Final Four where she saved her best for last.

Adcock had already led Briarwood to wins of 7-3, 10-0, 6-1 and 11-1 heading into the Final Four showing they were a major threat. What she was able to do in the clutch of their final two games, however, was one of the more determined high school sport performances I have ever witnessed.

In the semifinals, the impressive senior posted a four-goal performance to lead the Lions to a 6-1 win over Faith Academy to put Briarwood one game away from the title. She followed that up with a six-goal performance in the championship game against St. John Paul II as she was responsible for all six goals in the 6-1 win. She scored 10 goals on the biggest stage against the two best teams in the division. Let that sink in.

“Having a goal scorer like her you can count on is so important to a championship team,” Leib said of her knack for scoring. “That’s why strikers make so much money in the pros because you have to have that person that can score.”

It’s hard to put into perspective just how good of a season she had, but she outscored the next highest player in the county by 12 goals in Chelsea’s Haley Greene and the third highest goal total by 21 in Oak Mountain’s Julia Pack. All of those performances would have been player of the year numbers last year as 25 goals marked the county high, making Adcock’s senior-year performance almost 30 goals higher than that number.

Adcock helped lead Briarwood to an overall record of 15-5-3 as they didn’t lose a single game to an opponent lower than the 7A classification. Their five losses came to 7A state champion McGill Toolen, Spain Park, Oak Mountain, Mountain Brook and Hoover.

Adcock will now move on to Mercer University to continue her playing days in the SoCon where she will compete against twin sister Maggie Adcock who is also attending a SoCon school in Wofford University.

It leaves Leib with a big hole in his lineup after saying, “I’m glad we have Sarah Adcock on our team” after the state championship, but I’m sure he will bask in the glory of the success Adcock helped her head coach achieve.

She will now leave the school a state champion and a memory that will last a lifetime as those 10 Final Four goals will forever be at the forefront of her storied career.

By ALEC ETHEREDGE | Sports Editor CHELSEA – With a total of five state champions across both the boys and... read more