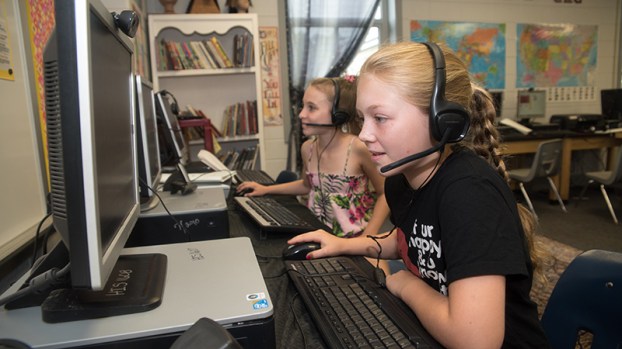 Campers learned all about coding the week of June 19, during the Camp Code enrichment summer camp at Helena Intermediate School. (Reporter Photo/Keith McCoy)

Campers learn to code at HIS enrichment summer camp

HELENA–Puzzles, numbers, and lots of problem solving were on display the week of June 19, as Shelby County Schools enrichment campers were hard at work at Camp Code at Helena Intermediate School.

Campers used different computer programs and robots over the course of the five-day camp to further improve their coding and mathematical skills.

Upcoming sixth grader Brenlie Wingard said math is her favorite subject and explained why the coding camp has been beneficial for her at improving her skills.

“Khan Academy teaches us Java Script and teaches us computer language and how to make pictures and animation that can change the future,” Wingard said. “It shows us how to make movies using code function. We get to learn the language of computers during this camp and I never knew it could do so much stuff.”

Wingard was in the process of drawing different snowmen on her computer screen using different functions. Wingard could navigate back and forth between Khan Academy and Code.org to play different coding games.

In addition to the computer programs, she said her favorite thing about the camp was using iPads to drive drones on the ground as well as flying them in the air when the weather permitted.

The classes are open to students who are zoned for Shelby County Schools and may be limited to certain ages or grade spans.

By GRAHAM BROOKS / Staff Writer HELENA–What better way to learn art techniques than to learn from someone who developed... read more