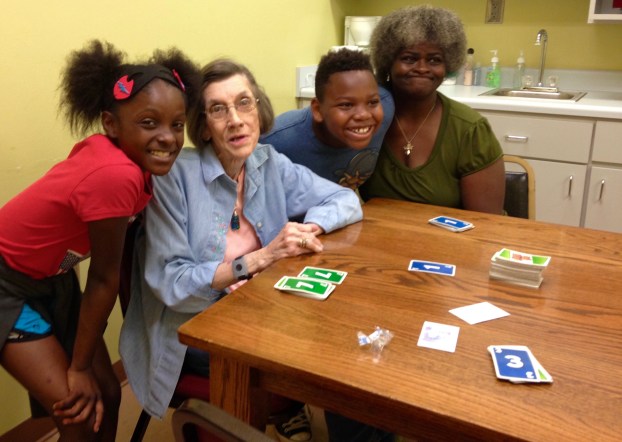 Could empathy increase when youngsters and oldsters start spending time together?

That is the question that occurred to Joyia Williams, a McNair Scholar at the University of Montevallo, when she began thinking about possible topics for her undergraduate research project.

To answer it, Williams took 10- and 11-year-olds from the Boys’ and Girls’ Club of Central Alabama next door to the Grady Parker Senior Center. Both of the groups are housed in Orr Park.

When old folks hang out with these kids, they teach them things … like how to play the senior center’s favorite card game.

Adams said he also figured out that “one reason that when you get older you may sort of slow down and sometimes not remember, is that your head has a lot of knowledge in there, and there isn’t room for everything.”

Te’von Gentry, 10, also picked up on Skip Bo, a card game he likened to Uno. He also paid attention to how his new senior friends spend their time. “They like to read books and eat soup.”

Joyce Bridges, 81, laughed as Kennedy Reaser, 10, came into the room where Bridges and Debra Spruel, 62, were engaged in a lively game of—you guessed it—Skip Bo.

“They certainly bring a lot of energy with them,” Bridges said of the youngsters.

Spruel laughed as she counted up her own 13 grandchildren. The B&G kids bring a special atmosphere, she said, because they are “always laughing, and they like to play.”

Williams, a graduate of Pleasant Grove High School, is a senior majoring in special education. As a McNair Scholar, she has had graduate school in her sights since Day One.

“This research project is helping me prepare for graduate school,” she said.  Last summer she worked at the Boys and Girls Club, but this summer she is working on four classes. However, she remembered her old summer job … and she thought about the postulate that community service can increase empathy.

Williams used Bryant’s Empathy Index—a psychologist’s tool—to measure the 10 students’ empathy before they started the visits. And at the end of the seven-day period, she gave them the 22-question index again.

“Two of them didn’t change, but everyone else went up at least two points,” she said.

That indicates that the time spent doing nice things with other people and getting somewhat out of your comfort zone actually improves empathy, an important factor in fighting such problems as bullying in schools.

And it can lead you to a hot game of Skip Bo, too.

By NANCY WILSTACH / Community Columnist The music from the mariachi band makes you tap your foot and clap your... read more