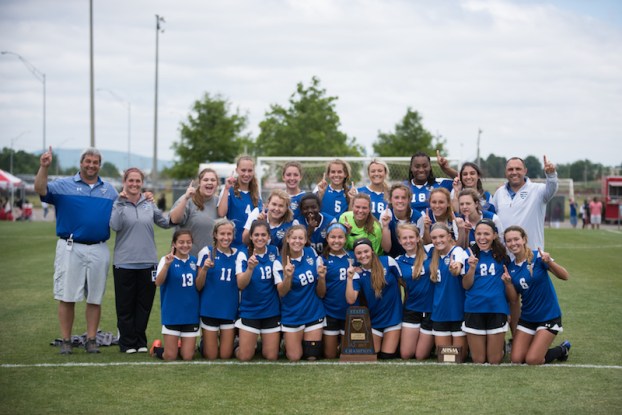 Chelsea head coach Jonathan Hammett, far left, navigated his team through one of the toughest schedules in the state as the Hornets went on to win the 2017 6A state championship, which earned Hammett his second straight Coach of the Year honor. (Reporter photo/Keith McCoy)

CHELSEA – With a total of five state champions across both the boys and girls soccer divisions in the county during the 2017 season, picking a coach of the year was a difficult task.

It came down to one deciding factor and that was history. McDonald leading the Panthers to their first title was undeniably the biggest success story across soccer in Shelby County this year and earned him the honor of Coach of the Year, despite the other two being more than deserving.

Choosing a coach of the year in the girls division wasn’t much easier as two coaches led their teams to state championships in Briarwood’s Ryan Leib and Chelsea’s Jonathan Hammett. Oak Mountain’s Chris Blight also had success in 2017 leading the Eagles through one of the toughest schedules possible as they went on to find a spot in the Final Four.

Ultimately, the decision came down to Leib and Hammett as both did exactly what they needed for their team to become championship level competitors.

While both played very difficult schedules and both had help from stars, Hammett bringing Chelsea its second state championship in school history was too much to ignore as it has become somewhat of a norm at Briarwood with the Lions grabbing their ninth in 2017.

It marks the second consecutive season that Hammett has won the award and for very good reason.

Last season he led the Hornets to a finish of 13-8 and a final ranking of No. 3 in the 6A classification with their only losses coming to 7A powerhouses in Hoover, Oak Mountain, Vestavia and Mountain Brook; as well as 6A power John Carroll.

In 2017 their schedule didn’t get any easier, as a matter of fact, it probably became more difficult as Hammett himself said, “this was by far our most difficult schedule we have ever played.”

He wasn’t lying either. Of the 24 teams they played throughout the season, 20 of them were played against teams that finished the season in the top 13 of their classification. Even crazier is that 11 of those teams were inside the top 5 at the end of the season.

Hammett was able to keep his girls focused through the difficult stretch and led Chelsea to an overall record of 17-6-2 and a perfect area record of 4-0 as the only unranked teams at the end of the season that the Hornets squared off against were area foes Helena and Pelham.

Perhaps what was most impressive is what Hammett was able to get his team to do in the postseason.

The Hornets started the first round with one of the toughest opponents they could have, the Homewood Patriots. After falling to the Patriots 3-1 in their second game of the season, Chelsea rebounded and shut out the No. 2 team in the classification at the time by a final of 3-0 to advance.

They followed that up with the shutout of another top team, beating Northridge 7-0 on the road in the second round. In round three, they took on John Carroll, who is always tough, at home. The two teams played to a draw at the end of regulation and overtime, leading to PKs. Eventually the Hornets prevailed to win 3-2 as they had punched their ticket to the Final Four in Huntsville.

They arrived in Huntsvill having already beaten two of the top three teams in the classification and had all of the confidence in the world. Hammett kept his girls focused and they closed the season out with a 5-0 win over Northview and a 2-0 win over Southside-Gadsden to win the state title.

Chelsea’s intensity had clearly picked up in the playoffs as they shutout four of their five opponents and outscored teams 20-2. It obviously had a lot to do with the players, but just as much to do with the coach that got them to perform at their best at the most opportune time.

Hammett has said this is “easily the best team in Chelsea history,” even topping the 2012 state championship team and he deserves a lot of credit for it. He was able to get the most out of his athletes all season long and has set a new expectation that will change the future of the Chelsea girls soccer program.