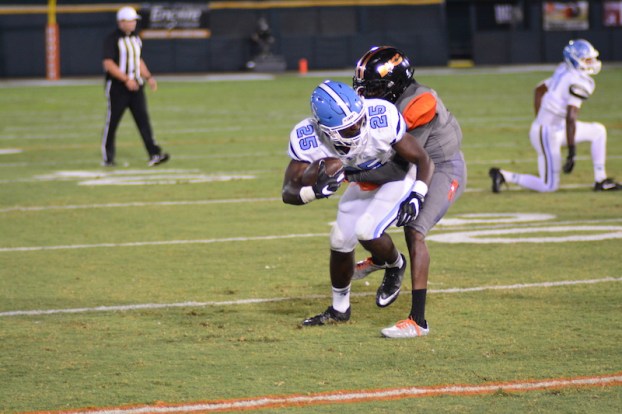 Spain Park’s Larry Wooden makes a move against Hoover this past season. Both teams were named as two of the top 10 most dominant teams in Alabama since 2006. (File)

The city of Hoover is known for several things, but one of the first places a person’s mind goes when they hear about the largest metro city of Birmingham is football.

It all started back in 1999 when Rush Propst took over the Hoover Buccaneers’ football program and turned them into an immediate dynasty. Propst helped lead the Bucs to a state championship in his second year and in his time at Hoover took them to seven straight championships going 5-2. His dynasty led to the MTV show Two-A-Days, which put the school on an even bigger national map.

In his third year at the helm, the creation of a second high school in the city came to fruition as Spain Park High School opened its doors in 2001, creating a massive rivalry between the two crosstown schools.

The two teams first faced off in 2002 and the Bucs showed no mercy annihilating the Jaguars 63-8 in the inaugural matchup. Hoover went on to win 12 straight matchups against Spain Park going into the Josh Niblett era. They stopped playing each other due to realignment in 2012 and 2013 before resuming a one-sided rivalry in 2014.

Finally, on Thursday, Oct. 1, 2015, the Jaguars prevailed in a 17-0 win at the Hoover Met, defeating the Bucs for the first time in the school’s 14 football seasons. Not only did they beat them once, but they took down Hoover for a second time, 7-6, in the semifinals of the AHSAA state playoffs to earn the school’s second state championship berth.

While it took 14 years, Spain Park had cemented themselves as a real threat to the Bucs and become one of the state’s legitimate high school football teams.

On Friday, June 13, MaxPreps put out a list of the top 15 most dominant Alabama high school football programs since 2006 and both the Jags and Bucs found themselves on the list.

While the Propst era at Hoover ended in shame during 2007, Niblett took over the reins in 2008 and they didn’t skip a beat. Niblett led the Bucs to seven straight state championship game appearances including a 4-3 record. They added an additional championship win against McGill Toolen in 2016 and to no one’s surprise, Hoover was the No. 1 team on the list.

Points were based off championships, state title game appearances as well as a team’s final ranking in the MaxPreps Alabama football computer rankings.

Spain Park finished sixth on the list with a total of 115 points, not too far behind their crosstown foe. The Jags’ two runner-up finishes in state championship games was good enough for 20 points and their eight top 25 finishes in the last 10 years made up the rest of that point total.

Since 2006, the Jags have won eight games per year, including a 13-win season and a 12-win season, have made an appearance in two state championship games and taken home three region championships while competing in one of the toughest areas in all of Alabama high school football.

With former coaches including names like John Grass, now the head coach at Jacksonville State University, and Chip Lindsey, now the offensive coordinator at Auburn University, the Jags have really made a turn for the best over the last 10 years. While Hoover is still clearly the top dog, not only in the rivalry or state, but the country, Spain Park is slowly becoming a power of its own in its first 20 years of existence.