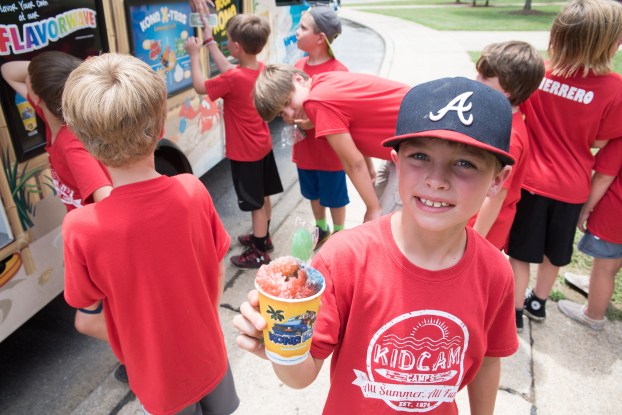 PELHAM – It’s not too late for parents to sign their children up for a fun summer camp program. Registration is still open for Kidcam Camp, which is housed at Oak Mountain State Park.

Camp director Lissa Walker said the summer camp is only in its second summer at OMSP, but participation numbers have doubled from what they were last year.

Walker said an average of 30-50 kids attended the camp each week last summer, compared to well above 60 kids each week this summer. Parents are able to choose the weeks they want their children to attend camp, something that Walker said is an added bonus for families who have summer vacations planned.

The camp, which is for children ages 5-13, is Monday through Friday from 9 a.m. to 3 p.m. The camp offers early drop off and late pickup for parents. There is no additional charge for early drop off, which begins at 7 a.m., but there is a $2 fee every half hour for late pick up, which ends at 6 p.m.

During the day, campers have access to all of the amenities at of OMSP, including fishing, archery, paddleboats, swimming and hiking.

“Most of the activities are outside,” Walker said. “The kids love it because they get a lot of outdoor time. They love swimming in the lake. A few of them even fall asleep during aftercare because they’re so worn out.”

First year counselor Emma Stewart, 18, said there’s so many things to do at OMSP that the campers never get bored.

“The counselors are encouraged to participate in activities with the kids and be the ones to set an example, so that keeps us having fun, too,” Stewart said. “Being a counselor is tough sometimes but getting to see them have so much fun is definitely rewarding.”