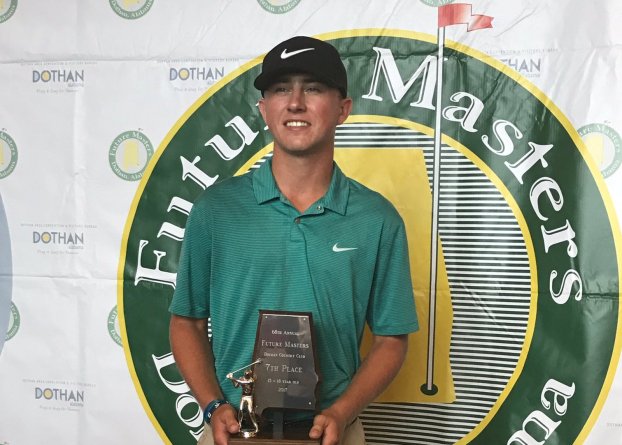 Spain Park's Nick Robillard poses with his trophy after finishing in the top 10 of the 15-18 age division at the Future Masters golf tournament in Dothan. (Contributed)

DOTHAN – One of most prestigious golf tournaments around the country was held in Dothan from June 17-24 and featured several of Shelby County’s top golfers.

Not just the county’s best, but the best youth golfers from all corners of the country came to Dothan Country Club to take part in the 2017 Future Masters Tournament; a tournament that is a key predictor of future success in golf.

Its history features many current PGA tour members including Stewart Cink, who won the tournament in back-to-back years in 1990 and 1991. Other popular names to have played in the tournament are Bubba Watson, Masters Champion, David Duval, currently an analyst on the Golf Channel, Harris English, Russell Henley, Charles Howell III, Brandt Snedeker and many more.

While several of the country’s best young phenoms were there, it was several county players that showed out and impressed, particularly members of the Spain Park boys golf team.

The Jags have become somewhat of a dynasty over the last 10 years despite switching coaches on multiple occasions and their success continued to prove true by sending six golfers to compete in the prestigious event.

Nick Robillard and Nick Dunlap had the two strongest showings for not just Spain Park, but the county as well.

Dunlap competed for the second consecutive year in the Future Masters and was trying to continue a successful venture that started with a championship in the 11-12 age division in 2016 after topping 76 other golfers. He shot rounds of 71, 64 and 70 to finish with an aggregate total of 205 as he finished at 5-under par. His second-round 64 in that tournament was the lowest of any round in his age division.

In 2017, Dunlap jumped up to the 13-14 age division and continued his success at the course. While he didn’t win a title for the second consecutive year, he came up just short finishing in a tie for third with two Florida standouts in Luke Clanton of Miami and Frankie Harris of Boca Raton.

Dunlap finished with a total of 137 after two rounds thanks to rounds of 67 and 70 to finish the rain shortened tournament at 3-under. That was just off the second place total of 4-under and champion Bruce Murphy’s 7-under score. It was his first year in the age division, making the finish impressive and making him a strong favorite to win next year.

Robillard also had a strong showing in the 15-18 age division, which is the highest in the tournament. After firing a 2-over, 72 on day one of the tournament, he was a little further back than he had hoped, but followed that up with a 3-under 67. He finished the third and final round with an even-par round of 70, which gave him a three-day total of 1-under, 209. That score was good enough to finish in solo seventh, giving him a top 10 finish.

Another one of the strongest showings came from 17-year-old Ethan Hagood, who was coming off a championship at the SGA Southern Junior Tournament, in which he birdied five straight holes to win in a playoff.

Hagood followed that performance up with a solid three-day total of 221 to finish the Future Masters at 11-over par in a tie for 56th. He was joined in that tie with teammate Matt Stuart who shot rounds of 72, 77 and 72.

Carey Hereford also competed in the prestigious tournament taking part in the 13-14 age division. He finished with a two-day total of 165 after shooting rounds of 85 and 80.

Landon Carner was the last of the Spain Park players to compete in the tournament and took part in the 15-18 age division. He fired rounds of 75 and 77 for total of 152 to miss the cut and finish in a tie for 119th at 12-over.

Thompson’s Landon Wockenfuss also competed in the tournament and despite finishing in a tie for 152nd after rounds of 81 and 73, he was one of the younger competitors at 15-years-old and he will be back to compete in the tournament for the next few years looking to improve on his finish.