COLUMBIANA – A 30-year-old Maylene woman is facing up to 20 years in prison after she was arrested in late June and charged with allegedly distributing marijuana from her residence. 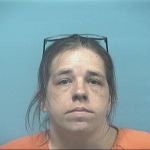 The Shelby County Drug Enforcement Task Force arrested Lindsey Michelle Gower, who lists an address on Shelby County 17 in Maylene, and charged her with one felony count of distribution of a controlled substance.

According to her arrest warrant, Gower’s charges stemmed from a Dec. 2, 2016, incident, during which she allegedly distributed marijuana from her residence.

According to Shelby County Circuit Court documents, Gower has been arrested several times in the past on second-degree domestic violence charges.

As of June 26, Gower remained in the Shelby County Jail on a $10,000 bond, and did not yet have any future court dates listed in Shelby County District Court.