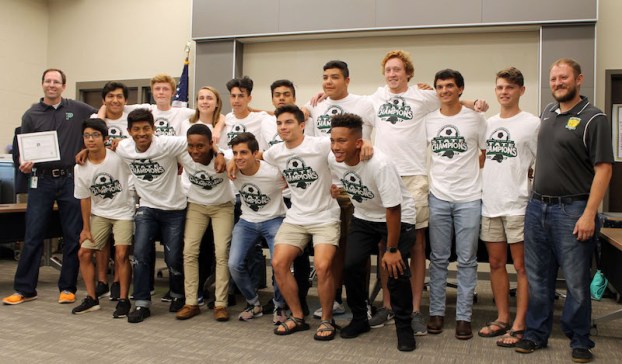 “For those who saw the original council meeting agenda listing recognition of the PHS Boys Soccer Team for their 6A State Championship Season scheduled for tonight, please know that we’ve postponed that recognition for a couple of meetings. The team is participating in an out-of-town camp to prepare for next year’s season—and, of course, we want to encourage that preparation,” said Pelham City Council President Rick Hayes.

Attending last week’s council meeting to share details of our PHS Community Read with city leaders, I was sorry to miss another photo opportunity with the PHS 6A State Championship Boys’ Soccer Team; however, I knew I had good photos from their PCS BOE recognition earlier. On the other hand, I loved the idea of pairing an introduction of Pelham’s community read title, “Big Fish: A Novel of Mythic Proportions,” with a team of mythic proportions—young men who have captured Pelham’s first-ever Soccer Championship. Remembering the victory is sweet.

Only 12 days before graduation, Pelham High School’s Boys’ Soccer team was entering the finals for the 6A Championship. Knowing how PHS Junior Braxton Jeffcoat spent the previous weekend, I felt certain that he was having more fun although he may have been just as nervous.

Jeffcoat, a stellar soccer scholar athlete, was a student in both AP Biology and AP English Language, Jeffcoat faced two challenges before the soccer semifinals and finals. On Monday, Jeffcoat was scheduled to take his AP Bio test and on Wednesday, he faced his AP Lang test. In preparation for these AP tests, Jeffcoat came to a voluntary study session for AP Bio on Saturday and was back Sunday for a voluntary study session for AP Lang. After taking his AP Bio test and AP Lang test on Monday and Wednesday, Jeffcoat scored the winning goal of Friday’s semifinals soccer game and, in the championship game, he was named MVP.

When student athletes are as fierce in the classroom as they are in their sports, that same competitive spirit and intelligent discernment evident in academics dominates in athletic competition as well!

By CONNIE NOLEN / Community Columnist High School students choose from many summer opportunities and obligations—especially as they prepare to... read more