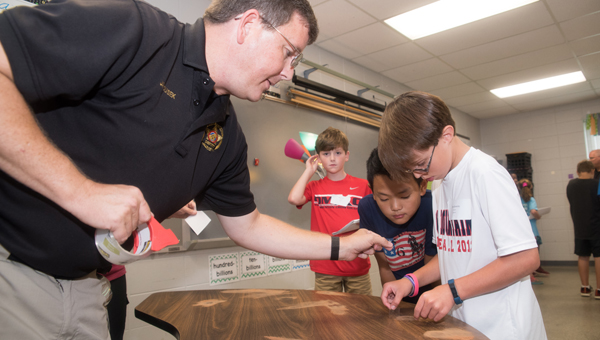 More than 40 students entering sixth grade participated in the free camp, which was held June 19-23 and staffed by school resource officers from across Shelby County.

The camp was the idea of James Sellers, who has been a school resource officer at Oak Mountain Elementary School through the Shelby County Sheriff’s Office for three years.

Sellers said the idea of the camp, which organizers hope to expand and hold every summer, is to teacher character skills and leadership, and expose students to law enforcement in a positive setting.

“We want to show them we’re good people, too,” Sellers said.

For the Breakout puzzle, students were grouped into teams and competed against each other.

After solving a puzzle that included riddles, UV lights and book ciphers, the winning team unlocked a box that they found to be empty.

Shouts of excitement were replaced by groans of disappointment: “We did all that for nothing?” one student exclaimed.

“What you all just found was an intrinsic reward,” Sellers said. “Rewards aren’t always external. You had a hard problem and you solved it. You worked through your frustration. In life, somebody’s not always going to tell you you did a good job.”

Emma Bellamy said she enjoyed the etiquette session, which taught the importance of using utensils no matter the food being eaten.

“That was the fanciest way we’ve ever eaten a donut,” Bellamy said.

Eliza Barnes said that during a CPR class, the students named their dummies.

“I don’t think Joey survived,” Barnes joked about her dummy.

Gerardo Hernandez, meanwhile, said he liked competing against police officers in a physical education game often played at the school called 9 Square in the Air.

Hernandez found his new opponents more difficult than his classmates, who dubbed him “The Spike Monster.”

“I tried to spike him out, but then he came back and I couldn’t do anything,” Hernandez said. “Cops are really hard to spike out.”

Campers learn to code at HIS enrichment summer camp

By GRAHAM BROOKS / Staff Writer HELENA–Puzzles, numbers, and lots of problem solving were on display the week of June... read more