Inmate recaptured after escaping in Alabaster 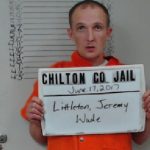 “We Took him back in custody last night at 9:45 in the 100 block of County Road 8,” Chilton County Sheriff’s Office Chief Deputy Gerald Mims said.

Inmate Jeremy Wade Littleton had escaped custody at Shelby Baptist Medical Center, after being taken to the emergency room on self-inflicted medical issues.

“We believe that was in the attempts to get out of jail on a medical release,” Mims said.

According to a CCSO press release, “Littleton was able to evade law enforcement by sneaking out of his hospital room’s bathroom” at Shelby Baptist Medical Center around 6:30 p.m.