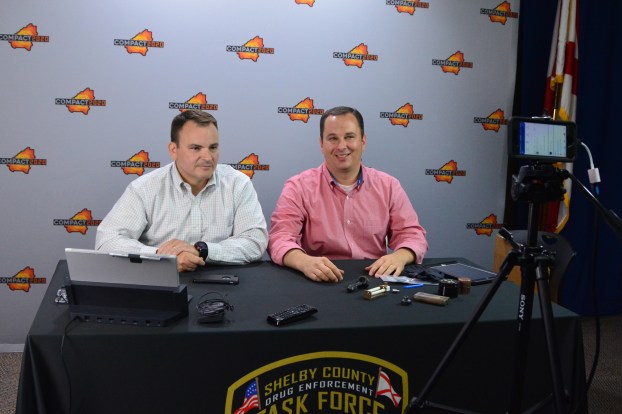 COLUMBIANA- The Shelby County Drug Enforcement Task Force went live on Facebook to host a town hall meeting at 11 a.m. on Tuesday, June 27. According to SCDETF Cmdr. Clay Hammac, this is the first time one of their town hall meetings has been live-streamed.

“We’re very passionate about this crusade to share information with parents. This is life saving information,” Hammac said. “This is a platform we can utilize to reach parents in their own homes on their own terms.”

During the video, Hammac said he hoped using Facebook would be able to overcome logistical issues that prevented many parents from attending previous town hall meetings in person.

“We have hosted a number of community events, and sometimes the attendance isn’t what we would want it to be,” Hammac said. “It’s not for lack of interest. Life gets busy, so we get that.”

Hammac encouraged parents to have a better understanding of the peer pressure their kids face on a daily basis.

“Moms and dads, you have no idea the intense peer pressure that your young adult is facing,” Hammac said. “We want to tell parents to be empathetic and understanding.”

Miller said the use of social media and cell phones often contributes to peer pressure, and urged parents to limit access to both.

“When we were in school, and we got home, our day was over,” Miller said. “Parents need to be intentional with these devices and how their kids are allowed to use these devices. Kids are constantly exposed, constantly onstage, performing for one another.”

According to Hammac, there is a misconception among many parents that certain types of drug abuse, especially with marijuana, can be harmless.

“We have actually encountered moms and dads, who we are trying to actively help address a situation, and the response we get is, ‘It’s just marijuana,’” Hammac said.

“There is just no such thing as harmless drug use. We listen to the participants in our drug court. Time after time, they tell us ‘I’ve been using since I was 12 or 13 or 14. It’s almost always marijuana that they started with,” Miller added.

Because the live video had over 2,000 viewers, Hammac said they managed to reach more people than the average town hall meeting.

“That’s more people than what we can fit into a high school auditorium,” Hammac said.

Hammac and Miller said the prevalence of different types of drugs in Shelby County varies depending on the part of the county. However, Hammac said the drug that claims the most adolescent lives is heroin.

For this town hall meeting, The SCDEFT partnered with the Shelby County Sheriff’s Office, Compact 2020, the Alabaster Police Department and the Pelham Police Department. The video is currently available on the SCDEFT’s Facebook page for viewing.