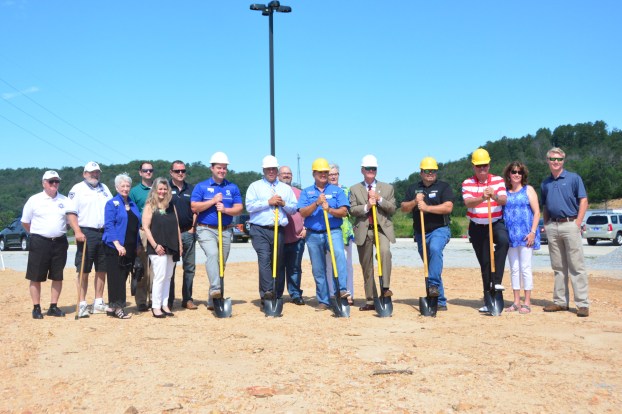 Co-owners and brothers Mike and John Craft, along with city officials and representatives from other organizations, break ground for the new Chelsea Motors at a ceremony in June 27. (Reporter photo/Amalia Kortright)

CHELSEA- Chelsea Motors celebrated the beginning of construction for its new building at an onsite groundbreaking ceremony at 10 a.m. on Tuesday, June 27.

Brothers and co-owners Mike and John Craft said Chelsea Motors is an extension of Chelsea Tire, which they also own. According to Mike Craft, Chelsea Tire has been a part of the community for over a decade. The car dealership opened four years ago, and Mike Craft said they have been working out of a trailer ever since.

“We’ve always bought and sold cars, and we had this lot here. It’s been a long time coming,” Mike Craft said.

Mike Craft said Chelsea Motors is currently the city’s only independent car dealership with a full-fledged service department, and having a building will allow them to provide better service to customers.

Because many banks will not “do business with a gravel lot,” Mike Craft said the new building will help them bring in more lenders and make the business seem more professional.

John Craft said the exterior of the building will reflect its support for the city through its color scheme.

“We’re trying to keep with the theme of the Chelsea Hornets,” John Craft said. “We want to support our schools.”

Mayor Tony Picklesimer thanked the Craft brothers for their contributions to Chelsea.

The groundbreaking ceremony was sponsored by the South Shelby Chamber of Commerce. Chelsea Motors is located at 347 Chesser Drive off U.S. 280.

“My business philosophy has been simple: Treat every customer like they’re your mom,” Mike Craft said.