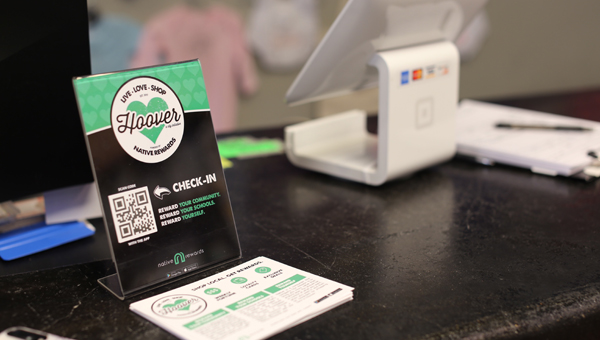 The Live Love Shop Hoover initiative focuses on the Native Rewards app that can be a resource for shoppers and the business community. (CONTRIBUTED)

HOOVER – The Live Love Shop Hoover initiative could change the way people shop in the city.

The Native Rewards app designed to support the initiative launched on June 20.

Available through the App Store and Google Play, the app is a resource that both shoppers and business owners may find valuable.

Native Rewards was founded two years ago in Ft. Payne by a group of friends who had roots in the area: Ashley and Jordan Doufexis, Joe Mayes and Ryan Tramel.

Doufexis said the idea was to create a tool that would allow locally owned businesses to compete with e-commerce giants like Amazon.

“Our local economy was something we could be on the same page to support,” Jordan Doufexis said.

Doufexis said the group studied possible next locations to institute their app and decided on Hoover because of its significant retail base and political climate.

“Hoover is so focused on the school system that it married well with what we’re trying to do,” Doufexis said.

Hoover officials have supported Native Rewards as an economic initiative, with the City Council even approving a plan including Native Rewards’ involvement.

The Doufexises and Tramel have moved to Hoover as the app gets off the ground.

Users “follow” participating businesses and see all of the posts from that business.

There is a “Discover” function that suggests businesses based on the user’s location.

Every participating business has a profile, and users can click through to call the business or pull up directions.

Under the “Deals” section of the app, users can find coupons that businesses have pushed to them.

Customers can also take advantage of loyalty cards offered by businesses, earning an incentive set by the business after a certain number of “punches” on the digital card.

The “Fortune” section is what sets the app apart, Doufexis said. Here, winners of weekly giveaways will find funds they can use at participating businesses.

Users “check-in” at businesses by scanning QR codes at cash registers. Each check-in gives the user a chance to win the weekly giveaway.

The giveaway—which comes at no cost to merchants—is $50, half of which must be spent at the business that produced the winning check-in.

Native Rewards has given away more than $16,000, Doufexis said, and since the funds are provided by the company, they serve as an injection into the local economy.

Native Rewards is donating 1 cent to the Hoover City Schools Foundation for every check-in.

“It has tied together city hall, the business community and the education system,” Doufexis said.

The app is free to download and use, and Doufexis vowed that it will “always be free.”

Doufexis also said users’ information would not be manipulated or sold to third parties.

“The consumer is only going to receive what they want to see,” he said. “It’s about giving that shopper complete control.”

The other side of the app is the business dashboard, where owners and managers can create posts, coupons and loyalty cards, and monitor number of check-ins and promotion redemptions.

Once a business signs up, Native Rewards offers on-site, personalized training to ensure owners and managers know how to take advantage of the app’s features.

Participation in the program costs $49 per month, and there is also a fee tied to redemptions of coupons.

Thirty-three businesses have joined the program so far, Doufexis said, with about half of that number fully trained on all the app’s features.

The support of city officials is based on a tax structure under which purchases at brick-and-mortar stores produces more revenue for a city than online purchases.

Sales of $1 million at brick-and-mortar stores produces $30,000 for Hoover, while the same amount of sales online produces $565, according to information provided by Councilman Casey Middlebrooks.

COLUMBIANA- The South Shelby Chamber of Commerce and the Shelby County Arts Council are teaming up to host the Shelby... read more