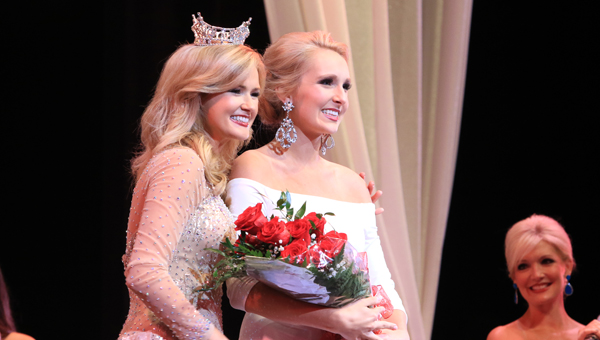 Being named fourth runner-up and the Academic Scholarship Interview winner in the Miss Alabama are significant accomplishments for anyone, but for 2015 Oak Mountain High School graduate Brooklyn Holt, the list is much longer.

The Academic Scholarship Interview was selected from among all 48 pageant contestants.

Holt’s mother, Clarisse Holt, estimated Brooklyn earned about $10,000 through this year’s Miss Alabama Pageant and more than $100,000 through the program overall.

In the Miss Alabama Pageant, Holt’s platform was “Raise Your Voice for Children.”

As part of this effort, Holt travels across the state encouraging children to not dwell on negative things that have happened to them.

Holt was raised by a single mother and was inspired to choose the Boys and Girls Club to be the organization she supports, her mother said.

“A crown is glitzy and pretty, but Brooklyn knows your future is what you make it,” Clarisse Holt said.

Holt was featured twirler at OMHS and National Honors Society president among involvement in numerous other clubs and organizations.

She earned a 4.5 GPA and 34 ACT score by the time she enrolled at Auburn University, where she was the recipient of the Presidential Scholarship for four years of tuition, and the Dudley Scholarship.

Holt, who is working toward a double major in journalism and political science, plans to pursue a master’s degree and maintains a 4.0 GPA.

Holt began dancing when she was 2 years old, performing in twirling and voice at age 6 and earned her point shoes at age 11, Clarisse Holt said.

Brooklyn Holt has won state, national and international titles in dance, voice and twirl; and in March earned the title of AU Majorette for the third year.

Holt offers tutoring in math for the ACT and is an Auburn employee teaching calculus.

A member of Alpha Gamma Delta sorority, Holt is an Honors College Scholar and an ambassador for the College of Liberal Arts and the Honors College, of which there are only 12.

“That’s very hard to get at Auburn,” Clarisse Holt said. “There are a lot of smart kids.”

Clarisse Holt said her daughter plans to implement a scholarship in her name at Auburn as a way to give back to the university and students.

“She has a desire to be a successful woman,” Holt said. “That is her goal. She doesn’t want to ever depend on anybody.”

COLUMBIANA – Residents of 100 Inverness Apartment Homes may have to take matters into their own hands to get a... read more