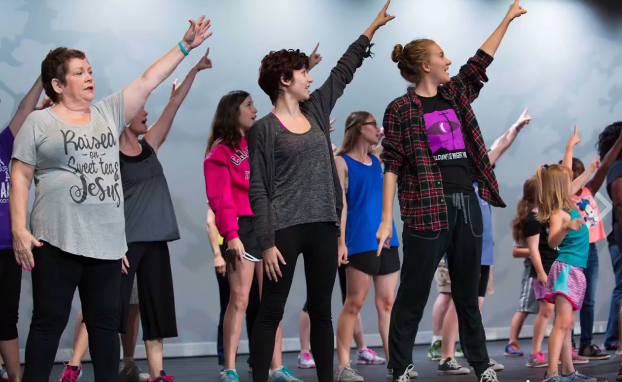 The cast of "The Music Man" rehearses a musical number from the production. (Contributed)

The production, produced in conjunction with Pelham City Schools, also marks the first time the auditorium at PHS will be used for a South City Theatre production. The show will run from July 13-16.

South City Theatre Artistic Director Sue Ellen Gerrells said the production will serve as a test run to see if an annual summer series, in partnership with PHS, is a possibility.

“There’s not a lot of opportunities for theater students during the summer, so if this goes well, we will plan a summer series for next summer consisting of two productions,” Gerrells said. “It would probably be one musical and one non-musical production.”

Gerrells said proceeds from “The Music Man” production will be split with the PHS Theater Department.

“So we’re hoping for a good turnout to recoup our investments,” Gerrells said.

The Tony Award-winning musical comedy by Meredith Willson has been entertaining audiences since 1957 and is a family-friendly story to be shared with every generation.

The Music Man follows fast-talking traveling salesman, Harold Hill, as he cons the people of River City, Iowa, into buying instruments and uniforms for a boys’ band that he vows to organize – despite the fact that he doesn’t know a trombone from a treble clef. His plans to skip town with the cash are foiled when he falls for Marian, the librarian, who transforms him into a respectable citizen by curtain’s fall.

The production is partially funded by a $1,500 grant, spearheaded by Councilman Ron Scott, from the Pelham City Council.

Ticket prices are $20 for general admission, $15 for students or senior citizens and $10 for PCS students. For reservations, go to https://goo.gl/L50FgS.

PELHAM – The city of Pelham entered into an agreement with Seating Solutions for the purchase and installation of replacement... read more