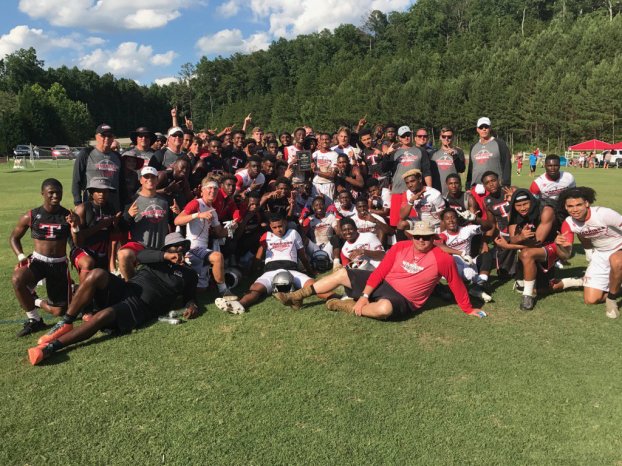 Thompson poses for a picture with the championship plaque after taking down Hewitt-Trussville in the Blackwatch 7-on-7 championship game. (Contributed)

Thompson wins first 7-on-7 of summer

NORTH SHELBY –  The talk of the metro Birmingham sports world this offseason has been none other than the Thompson Warriors, who competed in their first 7-on-7 tournament of the summer at the Blackwatch Sports Complex on Tuesday, June, 28.

Thompson has created the buzz around their program not simply because they have one of the most recognizable coaches in the state but also because they seem to be loaded up with talent that keeps getting a new Division I college offer every day.

Hawaii quarterback transfer Taulia Tagovailoa is just one of the phenoms that will take to the field in 2017 and outside of the spring game against McGill-Toolen, where he had been at the school for less than two weeks, the Blackwatch 7-on-7 tournament was the first competitive action we had seen of him.

It’s tough to jump on a bandwagon before seeing an actual regular season game, but the hype surrounding the young man seemed to be warranted. He threaded perfectly-spiraled rocket passes just out of reach of defenders and right into the hands of his receivers with each and every throw.

Tagovailoa went toe-to-toe with Paul Tyson, great grandson of Paul Bear Bryant, who led Hewitt-Trussville to record-breaking numbers on offense last year. At the end of the day, after facing each other in several pool play games, Tagovailoa and the Warriors came out on top in the championship game, showing the talk surrounding this team is already becoming warranted in the first summer event of 2017.

While Hewitt also took down Thompson before the championship, the Warriors were able to win the final showdown and it wasn’t just due to guys like Tagovailoa, but the strong receiving corps and defensive guys as well.

In the offseason, Thompson picked up a transfer in 2015 All-State second team receiver Ahmad Edwards out of Montevallo. While the receiving area has been a concern of head coach Mark Freeman, Edwards along with Mo Edwards and Alondae Vesser as well as others showed besides a couple of drops that they were more than capable to catch the balls from Tagovailoa as several showed off their strong hands during the event.

Moving over to the defensive side of the ball, Freeman probably has the biggest reason to be excited. If his offense lives up to what it’s projected to be he has a stout defense that can really put games away for them.

Although stopping an offense in a 7-on-7 event is extremely difficult and Thompson gave up several scores, several of the Warriors returning back seven showed a lot of promise.  Jalen Bustamante continued to flash his skills and made several big plays along with KJ Robertson, Elijah Clayton and Evan Clark. The defense didn’t even use Jalen Rayam, who quite possibly could be the best linebacker in the county this year, or Myles Brown, another returning safety/cornerback.

Other guys that didn’t get on the field were lineman, who aren’t used in 7-on-7 competition, which meant we didn’t even get to see two of their best players in defensive lineman Mackie McNeal and offensive lineman Amari Kight. All those two do is show the amount of added talent the Warriors have at every position cementing themselves, on paper, as one of the best teams for the upcoming season.

Freeman knows as well as anybody that there is still a long way to go between now and the opening game, but a run at a championship starts in the heat of summer.