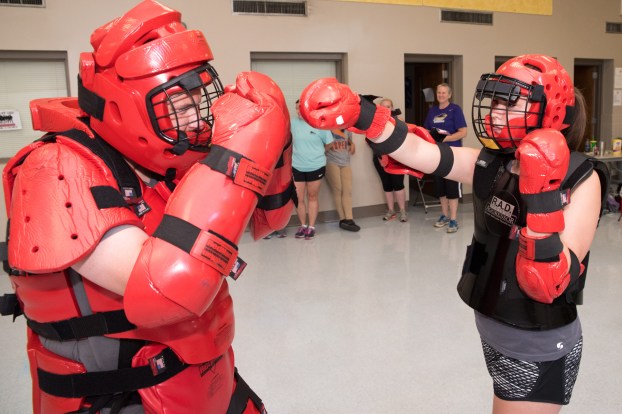 ALABASTER – For the past two weeks, officers from the Alabaster Police Department have provided local women with the opportunity to learn about the basics of self-defense through Rape Aggression Defense classes at the Thompson Sixth Grade Center.

APD Officer Jamison Lee cited a Susan B. Anthony quote while explaining how the classes help students: “I declare to you that a woman must not depend on the protection of man, but must be taught to defend herself, and there I take my stand.”

“We were trying to be proactive, instead of just responding to sexual assault incidents, Lee said.

According to Lee, classes began on Tuesday, June 20 and ended on Thursday, June 29. Each training session lasted from about six to 12 hours. Classes were free to the public and open to any female 13 years old and up.

“This is hours of us instructing them,” Lee said. “For three hours, they have to show us that they can escape from an attacker.”

During the classes, Lee said he has noticed many mother-daughter teams, and believes that the RAD classes give many parents the peace of mind of knowing their daughters can defend themselves.

Alabaster resident Jennifer Stokesbary, who attended a class with her 15-year-old daughter, said it self-defense was a necessary skill that she wanted her daughter to have.

“With her being a teenager, I want her to have the tools to arm herself, should the need ever arise,” Stokesbary said. “I want her to have a fighting chance defending herself, which could possible save her life or get her out of a bad situation.”

Lee said this is the fourth consecutive summer that APD has hosted RAD classes. During the classes, students trained using a “Red Man” simulation, where instructors suited up in protective padding, posed as attackers and allowed each student to safely demonstrate the techniques they learned.

Stokesbary noted that the techniques they learned in the class typically didn’t involve the use of guns, knives or any type of mace.

“They gave us tools and tips on how to use our bodies as weapons,” Stokesbary said.

In addition to self-defense, Lee said the classes taught women about the four keys to risk assessment: awareness, reduction, recognition and avoidance.

“We learned about not getting into a position where you can become a victim,” Stokesbary said.

Stokesbary said the classes helped many women build confidence and become more aware of their surroundings.

“I feel like it gave myself and other women a reality check,” Stokesbary said.